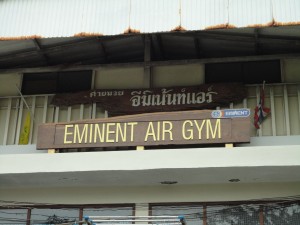 So, I’m still in Bangkok (I’ll probably hang around here until just after Christmas) and I just got back in from the Eminent Air gym so I figured I’d throw up an entry. I’ve been doing the majority of my training at 13 coins but recently, the vibe around the gym hasn’t been that great. Saenchai Sor Kingstar accepted a contract with the Sinbi Muay Thai gym in Phuket, so he left today.

“Mr. Coke” – the owner of the 13 coins resort(s) – seemed pretty upset about it but he has high hopes that Saenchai will be coming back. One of the trainers and 2 fighters recently got “let go” after a poor performance at Raja stadium so given the absence of Saenchai, Pornsaneh (also a champion who recently left the gym), the trainer and the 2 other fighters who were let go, the morale around the place hasn’t been that great – although it seems to be picking up again.

For a change of scenery – and to shed some light onto another one of the gyms here in Bangkok – I decided to check out the Eminent Air gym. Eminent Air is owned by and has been around for over 13 years. I’m pretty sure that the owner of the gym, Mr. Somboon Niruttimetee, also owns the “Eminent Air” air conditioner company that’s based here in Bangkok. He’s probably a successful businessman who decided to start a gym simply because Muay Thai is his passion (much like “Mr.Coke” at 13 coins).

The gyms most famous fighter, Soren Monkongtong, was one of the contestants/fighters on the Contender Asia reality show. He wasn’t there today, but regardless, the gym appeared to have a solid stable of fighters. Here’s some footage I took of a couple of the Thai fighters smashing pads..

I’d normally get a video of myself training as well but today, I just sat in the stands near the ring (yes, there are stands there), relaxed and filmed the fighters. I had every intention to train when I first got there but after eating a lunch that triggered an “undesirable response”, and after viewing and deciding I had no faith in the on-site washrooms (no toilet paper, no ass hose?), I figured it wouldn’t be the best day to be throwing high kicks in short shorts.

Since I’ve only spent 1 day here, and I didn’t even train, I can’t really provide a review of the place. I can just give my general impressions of it. The first thing that sort of surprised me was they started off with clinching (following a brief run and some skipping). I checked their website to see if that was their standard practice and yeah, it says on there that they “practice plum” to start all of their workouts for 30 minutes. At every other gym in Thailand that I’ve been too, they clinch after they hit pads. So, it’s just a little different.

I suppose one advantage of not actually training today and just watching the session is that I got to really pay attention to the details. By the looks of it, the trainers at this gym seemed to be good pad holders. The whole atmosphere during the training session was great. It wasn’t over crowded, the gym itself is pretty nice and the skill level was high (foreigners included). Here’s another video that shows a few of the foreigners who were training that day..

The vibe of the place really made myself and my buddy from Brazil (who was also sidelined today due to a sprained ankle) want to jump in and join the session. He liked the looks of things so much that he inquired about costs and if he could get a deal on a month of training. And, that’s the major downside to this place. It’s much more expensive than most gyms in Thailand.

A month of training here costs 15,000 baht per month. That’s nearly double the average cost of training throughout Thailand (which is about 8,000 baht). While the atmosphere and training seemed to be good, I didn’t really see anything that would justify such a high price. If you want to stay on-site, in a shared room WITHOUT air conditioning, the price is bumped up to 26,000 baht per month. Without air conditioning; I find that ironic considering the gym was built on profits from SELLING AIR CONDITIONERS.

In Thailand however, everything is negotiable so my friend tried to negotiate his way to a better price. He offered to pay 10,000 baht per month for twice-a-day training (which is over the average prices) and his offer was turned down. The lowest he could get was 10,000 baht for once-a-day training or 12,000 baht for twice-a-day. He’s been here for 8 months so far, and plans to stay for as long as he can, so it was a little more than he was willing to pay.

If you have the money to spend though, you might want to give Eminent Air a try. I’d recommend that you find off-site accommodations though because like most of the gyms, Eminent Air increases the room rates well above the local standards. For 4,000 – 6,000 baht per month, you should be able to find yourself a private room with air conditioning etc. in most of the Bangkok neighbourhoods. I’m paying 5,800 baht per month where I am now near 13 coins.

Anyway, that about wraps it up for Eminent Air. Oh, with the 500 baht I saved by not training, I went to the Boon store and picked up a couple shirts (220 baht each)..

I’ve sort of fell into a comfort zone here at 13 coins, but with a limited amount of time, I’ll be bouncing around to a bunch of different gyms in the next few weeks. Next week I’ll be checking out Saengmorakot and Jockey gym. Saengmorakot looks amazing, based on videos I’ve seen on youtube anyway, so keep checking back for the reports and whatever training footage I’m able to get.

I’ll finish this entry off with a little game called “which picture doesn’t belong?”…

Hint: If you picked “the 4 year old kid, in his underwear, hitting pads in the middle of Sukhumvit road while surrounded by sex tourists” .. you would be correct. Ah, I love the randomness of Thailand! 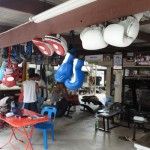 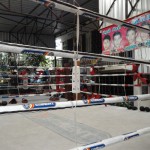 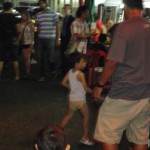 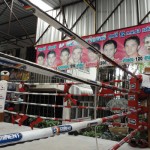 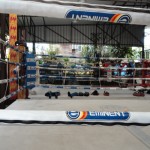 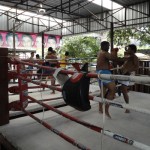