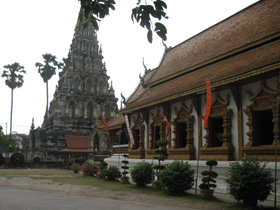 This is my 3rd trip to Thailand and until now, I’ve never went up North to Chiang Mai. After hearing the rave reviews that my friends were giving the place, I finally decided to head up there and see what all the hype was about. When I first arrived, I really didn’t see what the big deal was. I had become so comfortable with Phuket that I didn’t really take to the change very well.

Anyway, prior to coming, I had heard a lot about the “vibe” in Chiang Mai. After a few days of complaining, I started to pick up on the “vibe” that everyone had been telling me about. There’s just something about the place. It’s so laid back. The locals are friendly (as they generally are here in Thailand) but in Chiang Mai, the smiles seem more genuine.

They don’t get as many tourists up there as they do in say Phuket, Bangkok or Pattaya and the tourists that they DO get are of a different variety. Chiang Mai isn’t much of a party destination so the old sex tourists stick to Pattaya and Bangkok and the rowdy Australians stick to the bars and beaches of Phuket. Chiang Mai seems to get a lot of backpacker types. Actually, as I mentioned in the Lek Muay Thai review, most of the students that were training there were backpackers who were all staying at the same hostel.

So what made Chiang Mai so cool? Well, unlike places like Patong and Pattaya, Chiang Mai doesn’t feel like a fantasy land. It’s quite the opposite. It’s reality. It consists of Thai families who are living very normal lives. I guess the peaceful, laid back and “wholesome” aspect of the place provided the change of pace that I needed after spending so long in Patong.

“A big city with a small city feel” – that’s the best way to describe Chiang Mai. There’s no traffic jams and the air is clean (two advantages that Chiang Mai has over Bangkok). And although I wasn’t driving (I hate motorbikes), it didn’t seem like it was very hard to navigate through the city. There’s a moat that surrounds the downtown aspect of the city and it serves as somewhat of a navigation guideline.

The moat itself (in addition to the friendly people) contributes to the character of the city. It’s pretty sick. At certain sections, the moat is surrounded with remaining bits of the wall that was built …
There’s also fountains within the moat that get lit up at night. Here’s a video I took from the back of my buddies motorbike..

In addition to the moat, the clean air, the friendly people and the laid back vibe, Chiang Mai is rich in culture. There’s temples everywhere; the most impressive being Duisethep – which is located up in the mountain. On my last day there, I asked my buddy Ian what I “had to see” and following a quick meal, we were on our way up. It took about half an hour to get there but it was well worth the drive. Here’s a video I took as we were walking through the place..

Notice that we’re wearing shorts? Well, apparently we should have done more research prior to our arrival because wearing shorts is a big “no no”. I realized that when I saw a list of “do’s and don’ts” posted up and this picture of poorly dressed hippies was on it. Live and learn I guess. 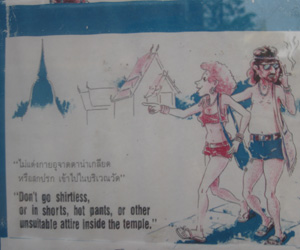 Anyway, to wrap it up, Chiang Mai is a pretty cool city. I can definitely see myself living there on a long term basis once I learn how to speak Thai and decide to settle down. The Thai boxing gyms aren’t as good up there (unfortunately), but that’s just based on my limited experiences at them. I only went to two and I‘ll post the reviews within a few days. All in all though, my experience was positive and providing you’re main intention in Thailand isn’t to party (there’s better places for that) then I recommend that you head up North and check it out.