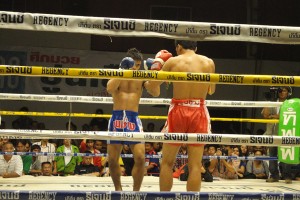 After years of living in Thailand and 6 months of living in Bangkok specifically, I made a discovery that will change my Sundays from here on out. Every Sunday afternoon they show live Muay Thai fights on channel 7. That I knew. I mean, how could I not? Everywhere I go on Sundays, whether it be to the barber shop or just down the street to get some food, I’ll usually see the Thai men glued to the TV sets watching the fights. Actually, two weeks ago I was getting a hair cut and the barber was multitasking between sipping his beer, watching the fights and snipping my hair. He also has pin ups of Thai bikini models all over his shop and the combination of it all makes for an “interesting” vibe.

Anyway, this past Sunday, Dan – who’s one of the trainers & fighters here at Kittana – had a friend who was fighting on channel 7 so he invited me to go watch. He said it would be free and at first, I thought he was going to be my “in” so I didn’t have to pay a ridiculous foreigner price for a ticket. However, when we got there, he said he was going to stay outside to wrap his friends hands and that I could go in by myself. I figured I would get stopped at the entrance and hit up for some money but to my surprise, I just walked right in. So yeah, apparently every Sunday you can head to the channel 7 station and get free entrance into the stadium. The fights and fighters are all top notch as well. Here’s some footage I took (note the enthusiastic Thai gamblers).. 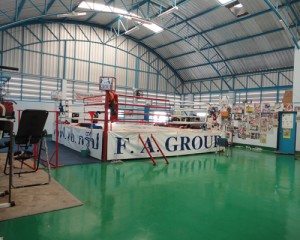 Prior to heading to the stadium, we had some time to kill so Dan wanted to check out a gym that he knew about. If not for him, I would have never found (or even found out about) this gym. It’s called “F.A Group” and it’s home to Muay Thai legend – and 6 time title holder – “Petchboonchu F.A Group”. We showed up off training hours, and on the “rest day” at that, so I didn’t get to see any of the fighters training but they were on-site (since they live there) and were seated around the table eating lunch.

They offered me some food and seemed pretty generous (like most people here in Thailand) and while I was there, I just sort of toured around the place looking at all the magazine clippings of fighters that were pasted along the walls. Seeing that I was interested, one of trainers (Petchboonchu’s trainer actually) approached me and started explaining the stories behind the images. Magazine clippings aside, the most impressive display at the gym was a mantle of Petchboonchu’ Lumpinee and Rajadamnern belts. Click here to see it.

I wasn’t able to get much information about the gym but the trainer was asking me if I wanted to fight so I think that they may be open to the idea of training foreigners although when I asked Dan about it, he said “only Thai man” train there. So, I’m not quite sure. It may be a possibility that they’d take you in if you were very talented and serious about fighting .. Or, if you paid the right price of course. 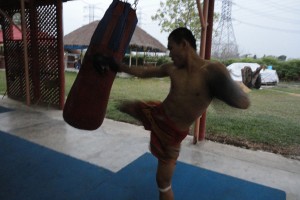 As I mentioned in a previous entry, I’m now helping out with a Bangkok based gym called “Kittana Muay Thai” and since the trainers arrived about 4 weeks ago, this is where I’ve been doing all my training. The opportunity of working at a gym here in Thailand couldn’t have come at a better time because I was really getting tired of scouring the city in search of the perfect training environment.

Right now, I couldn’t be happier with the level of training that I’ve been getting. Things are still quiet here (though reservations are starting to come in) so I’ve been getting a ridiculous amount of attention and instruction from the trainers. At the moment, there are 3 trainers here (they just added a new one) and only around 3-4 students per session.

One of the trainers and one of the students just went to fight down South so it’s been pretty quiet around the gym. The owner is here now and she just told me that she’s going to bring in a couple Thai fighters from up in Issan who will base themselves out of Kittana to prep for their fights at the big Bangkok stadiums
.
“Lucky” (one of the trainers), will also be bringing his 6 year old son to the gym to train and as things progress, I’m hoping that we’ll be taking in more kids (maybe even from the orphanage) so we can start developing some local talent. Actually, I think it will be cool to document their training, back-stories and fights on this site. Perhaps a “Progression of a Nak Muay” segment or something (ok, I’m sort of rambling now). Anyway, on to the next topic..

Michael Galvin, who runs MuayThaiTrainingCamps.com, has recently launched a new training highlight and photography business appropriately titled “Michael Galvin Media”. When I saw what he was up too, it made me wish I had video editing skills because I think it’s an awesome way to earn a living out here. Unfortunately, I have no idea what I’m doing when it comes to that stuff and judging by Mikes videos, the he’s amazing at what he does. So, I figured I’d mention his services because I’m sure it’s something that a lot of you would be interested in. Just contact him through either his facebook page or his website if you need more info.