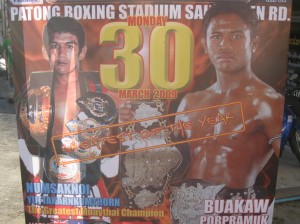 I’ll give you a hint – they call him the “Lumpinee Assassin” and he’s a 2 time K-1 Max World champion.
Imagine my surprise when I walked out of my room about 3 days ago and saw the giant event poster promoting a fight between Buakaw Por Pramuk and Namsaknoi. If you weren’t aware, Namsaknoi is a 4 time Lumpinee champion himself and is widely considered to be one of the greatest Muay Thai fighters in the history of the sport.

Almost seems too good to be true, doesn’t it? I suppose the MMA equivalent would be if you were to walk outside tomorrow and see that a super fight between George St Pierre and Anderson Silva was set to place this weekend and it was all going to happen 3 minutes away from where you live.

Well, the saying “if it seems to good to be true, it usually is” held true tonight because what was marketed as a “fight” turned out to be nothing more than a 2 round demonstration. I actually paid the admission fee for this event too because it was a packed house (I’m usually able to get myself waved in without actually buying a ticket).

As for the actual demonstration itself, it left a lot to be desired. Buakaw and Namsaknoi just lightly sparred (without punches) for two short rounds. Actually, the wai kru they performed at the start lasted longer than the actual demo. Here are some of the highlights..

It’s not all that surprising when you think about it though. Buakaw is used to fighting in front of tens of thousands of people for a lot of money. He’s under contract with K-1 and he’s actually set to fight Andre Dida towards the end of the month. I sort of figured that the chances of this fight being real were slim to none but I also figured that it would make for an interesting post nonetheless.

Of all the fight nights I’ve been too, this one was by far the best – and not necessarily due to the fights either. What made it so good was the atmosphere. The place was packed and the crowd was going crazy! I watched a video before I came here – and I even had it posted on the site for a while – and it described the scene perfectly.

The gamblers – and especially the corner men – were going nuts and surprisingly, the most popular fights were the fights that I personally found boring. In these fights, the fighters would be tied up in the clinch most of the time and would be scoring with knees to the body – although the knees didn’t look like they were landing that clean.

Every single time a knee was landed – even if it was those weak, modified knee strikes that are strictly thrown for points since they land with the inner leg rather than the knee itself – the corner-men and entire Thai crowd would raise their arms in the air and yell in “ayyyyyy” in excitement.

To me, the hyped up reactions of the Thai’s were more exciting than the actual fight itself. Check it out..

As for Buakaw, I noticed that his management team were going through great lengths to monetize his popularity any way they could. They had a stand set up outside the stadium where they were selling extremely overpriced T-shirts and fight shorts.

At the end of the night, Buakaw was sitting out there at the merchandise stand for photo ops. However, if you wanted your picture taken with him, they were charging 300 baht for the privilege. They even went as far as to auction off the very shorts that he was wearing during the demonstration.

Usually when that sort of thing goes up for auction, it’s announced that the proceeds will be given to charity but in this case, no charitable donation was mentioned. I’m pretty sure they were selling the used shorts off his waist strictly to line their own pockets. As for how someone can have a man-crush on an athlete big enough to pay for their used, sweaty gym shorts – well, that’s a mystery to me.

I do have to say though that Buakaw seemed like a nice guy. Before the fights started, me and my buddy were standing outside the stadium when he first walked by and we saw him for the first time. Their weren’t that many people around at the time and the few people that were around didn’t seem to recognize him.

My friend took the opportunity to approach him and ask him for a picture. Buakaw happily obliged and of course, he didn’t ask for any money in exchange for taking the time to do so. He genuinely seemed like a nice guy which leads me to believe that the whole idea of charging for pictures and selling used shorts are just schemes cooked up by his management team to capitalize on his success.

Now, in an unrelated incident – I witnessed a huge fight the other night. I filmed the whole thing but unfortunately, I was approach by a bunch of Thai security guards and they asked me to delete the footage. Actually, the asked for my camera but I certainly wasn’t willing to hand it over so deleting the footage was somewhat of a compromise.

At the time, I knew that there were ways to retrieve deleted clips from a memory card so I didn’t bother arguing. So within the next couple days, I’ll find a good program to use to get the footage back and I’ll post the video and back-story here for you to see.