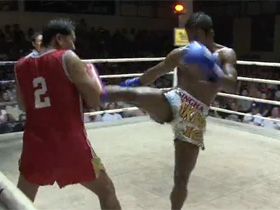 It’s been a while since my last entry so first off, Merry Christmas, Happy New Year and all that good stuff. Hope all of you enjoyed the holidays because I know I did. I’ll get into all that a bit later but first, I’ll get right into some Muay Thai videos. A couple weeks ago, Buakaw Por Pramuk and Ramazan Ramazanov came through Patong and put on a demonstration at the stadium.

I’m sure all you guys know who Buakaw Por Pramuk is (2 time K-1 Max champion) but Ramazan, being the lesser known of the two, deserves an introduction. He’s the current heavyweight WPMF champion as well as the WMC Intercontinental champion.

So now that you’re caught up with who these guys are and what they’ve accomplished, you can fully appreciate what you’re about to see. These videos were filmed and posted courtesy of Tiger Muay Thai and I’m glad they did it, because their camera is a lot better than mine.

The first video shows the two living legends of the sport doing a “wai kru” – which is a traditional Thai dance performed for good luck before the Muay Thai fights. The second video shows Buakaw Por Pramuk rocking the pads with the same vicious kicks that made him famous.

The third video shows Ramazan doing his thing on the pads as well and finally, the fourth video is the actual demo fight that they put on. Baukaw’s reaction time in that video is incredible. You have to love how he throws Ramazan’s leg over the rope before he counters. So, without further ado, here they are..

Anyway, I mentioned above that I had a good (interesting) new years and if you’ve been reading this site for a while, “interesting” events that occur on holidays that involve alcohol usually involve some sort of girl drama. And of course, this was no exception.

New years started with a party here at the camp. It was awesome actually. Bow (the manager) bought an entire case of Sangsom, along with mixers, and of course, about 20 pounds of meat for BBQ kabobs. And so, we ate, we drank, we laughed and then at around 11 pm, everyone exchanged gifts. I ended up giving one of the trainers a soccer jersey, 2 big bottles of Japanese beer and a phone card.

As for my gift, I got a cool looking statue of Buddha. It’s really nice actually and I’m glad I got it. The only downside to it is the fact that when girls come over and see it, they don’t want to do anything “bad” in front of it. It’s certainly not helping my “game”. Ah well. Anyway, here’s a quick video of the party. The kids (son and daughter of a couple of the trainers) are so cute..

Alright, so to backtrack a little, I met a girl on Christmas day. At the risk of sounding whack, there was an instant connection and we ended up going to an after hours club until about 7 am. The next day, me and my buddy walk by her work and since my vision is garbage, I didn’t immediately see her and walked straight for the washroom.

When I walked back, I was greeted by a semi-jacked – yet still attractive – girl from Issan bitching me out in front of my buddy and everyone else within a 10 foot radius. She was upset that I didn’t acknowledge her right away since we spent the previous night at the after hours place and if she had been talking to her friends about me that night (who knows if she was), then she would have “lost face” as they call it in Thailand.

Anyway, I smoothed it over by explaining that my vision was terrible but I definitely took mental note that if I made this girl angry, she has absolutely no issues about causing a big scene in front of a large crowd of people.

We hung out a bit after that and then we went out drinking on new years eve. At around 4 am, I got a call from an “old friend” that I answered out on my balcony. She wanted me to be her “person” for new years (her words, not mine) but I was legitimately explaining that I couldn’t see her and that I had company. Anyway, apparently the girl didn’t like the fact that I was talking to another girl on the balcony at 4 am, so in the middle of my conversation, I just heard my door slam.

I came in to check it out and she was gone. I tossed my phone on the bed, went outside and saw her literally running away. A few of the trainers actually sleep next to the ring so in the middle of the night, all they saw was a drunken Thai girl running from my room. It must make me look like some sort of sex predator or something. It’s definitely not a good look.

Regardless, I asked my trainer to give me a ride on his motorbike so I could talk to her but since it was New Years Eve, even he had been drinking and the manager of the gym took away all their motorbike keys (smart move). So, he did the next best thing, he chased her down with me (or attempted too anyway). He was hammered and wobbling back and fourth while attempting to walk straight and me, well, I was jogging after her, in a secluded mountain, in the middle of the night, with no shoes on.

At the time, I felt like I was running pretty fast too but I just couldn’t catch up to her. It got to a point where I couldn’t even see her at all. “That’s the fastest girl alive” I said to myself as I was gasping for air. Well, not really, but it definitely reminded me of the scene in “Superbad” where the cop is chasing “Evan”. You know. This scene..

Anyway, I ended up coming back to my room and calling her. She answered. “Hey, where are you?” I ask. “I’m in my room she replies”. “How did you get down so quick?” I ask. Apparently she hopped on a motorbike taxi and made up some crazy story to get a ride down the hill since she didn’t have any cash on her. “Well, are you going to come back or what?” I say. “Do you want me to come back?” she replies. “Um, yeah, come back” ..and so she does.

She stayed here for a couple days after that too but it’s a few weeks later and we’re not talking anymore. Partly her fault but admittedly, partly mine as well. I guess it’s for the best though because the manager at the gym here knows of her and said that she does Yabba and whatnot (which could in part explain her erratic behaviour) but damn, why am I so attracted to these crazy girls? I guess I just love the drama.

On another note, my training is going really well. I’ve based myself out of Patong Boxing Gym (since I like it here so much) but I owe it to you guys to go around and check out some of the gyms that I haven’t reviewed yet. So, I’ll certainly be doing that in the near future (hopefully sometime next week). I’ll post a video of myself training soon as well and hopefully you’ll notice some improvement from the others.

And while on the topic of posting videos, I just got back from another one of the fight nights at the boxing stadium so I’ll post those up in a few days when I get around to doing another entry. In the meantime, here’s a completely unrelated, yet incredibly humorous video of some Guido doing a homo-erotic dance for some unfortunate bar girl. Note his impeccable fashion sense; tight jean shorts (which he most likely cut himself), a sleeveless dress shirt which expose the tattoos on his skinny arms and of course – while unapparent in the video – he had the hairy chest going on as well. Classy.