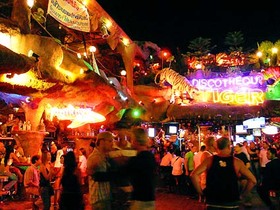 So in my last entry, I mentioned that there was a fight at the bar last weekend that I happened to catch on tape. I also mentioned that I was seen filming it and after things calmed down, I was approached by Thai security and believe it or not, they actually tried to confiscate my camera. Well that certainly wasn’t happening but to put them at ease, I told them that I would delete the footage, which I did.

Oftentimes at the gym, I’ll show one of the Thai trainers how to “press the record button” and then I’ll pass them the camera to record my padwork. Judging by how often they pass the camera back to me with the footage nowhere to be seen, it’s pretty safe to say that a lot of the Thai guys here aren’t very familiar with how digital cameras work.

In this case, that unfamiliarity turned out to be a good thing because if they were thinking, they would have asked for the memory card instead of simply requesting that the footage be erased. It took me about an hour or so of searching on Google but I ended up finding a program called Delete Fix Photo which allowed me to recover the deleted footage.

So as for the fight, the first thing I saw was a clearly intoxicated, overweight man wearing what resembled a raincoat sitting on the floor at the bar. Why he was wearing a jacket in Thailand I have no idea and why he was sitting on the floor, I’m not sure about that either but I’m assuming that he tipped over from his chair as a result of being so drunk.

At this point, there was a bit of a crowd starting to gather around and one of the Thai girls tried to help him up. When she did, his reaction was surprising to say the least. Rather than thanking her for her assistance, he remained in his seated position, said “FUCK OFF” and then reached over and struck the girl – who couldn’t have weighed more than 90lbs – with his left hand.

He then made it back up to his feet by his own accord and at this point, security was on the scene. Here’s some footage of the drunk idiot trying to attack some of the girls.

This back and fourth, pushing and shoving went on for quite a while. I’d say that it lasted for about 5-10 minutes – which is way too long. I worked at a nightclub back “home” and if someone were to physically attack one of the female bartenders, they would get thrown out immediately and in all honesty, they’d most likely have their head smacked into the door on the way out.

The Thai’s showed a surprising amount of patience with this guy. I knew what happened next was inevitable on account of how he was acting but I just thought that the Thai’s would get to it sooner. It wasn’t until the guy started swinging at the security guards that he finally got what he deserved.

Now I’m not normally one for violence and I think that 90 percent of the time it can be avoided but this is clearly an instance where it was both deserved and necessary. I just don’t understand what the guy was thinking. He’s a guest in the country, he’s alone, he’s fat, he’s old, he clearly can’t defend himself and yet he’s blatantly attacking pretty much everyone in sight, women included.