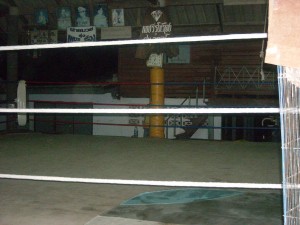 While it would be nice to spend everyday training at Fairtex, the 800 baht per session price tag doesn’t exactly suit my long term budget. Since I had to move on, the other day I went looking for a Muay Thai/MMA gym that I had heard about here in Pattaya. As usual, I got lost and found myself wandering down a little side street.

I suppose I lucked out because I looked to my left and noticed a small sign that said “Thai Boxing”. I turned down the volume on my Ipod and immediately heard the grunting and sounds of shins smacking against the pads. At first, I was somewhat apprehensive about going in as the place didn’t look like a public gym, but rather, it looked like someone just had a ring set up in their backyard.

After a minute or two of watching from a distance from what appeared to be a garage, I figured I might as well walk through and introduce myself. After all, the chances of me finding the gym I had originally been looking for weren’t very good. As soon as I made myself visible, one of the trainers immediately stopped, mid-round, with the kid he was training and inquired as to what it was that I was looking for (I’m sure he assumed I wanted directions or something).

“How much for training?” I asked. He paused and thought for a second, “300 baht” he replied. I have a feeling he just pulled that price out of his a@s but it sure beat the 800 baht I paid at Fairtex so I obliged, got changed and started skipping. I don’t think I’ve ever heard the word “farang” (non-offensive Thai word for foreigner) being tossed around so much. When you’re the only white guy around and the Thai’s are talking are dropping the “F-bomb” (falang) in your presence, it’s a pretty safe bet they’re talking about you.

Not that they were saying anything bad, I’m sure they were just talking about how awesome I am (right?). Anyway, once I was warmed up, I was told to kick the heavy bag 30 times per leg. When you kick the heavy bag, you usually have someone holding it for you and often times, you’ll be kicking it along with someone else (you kick with your right leg, the other guy kicks with his left), then you switch after.

Well, I was trading heavy bag kicks with a 9 year old. It was a unique experience to say the least and in no way am I ashamed to admit that in terms of technique, he was better than me.

With great difficulty, I finished up the 30 kicks per leg and while I was pouring water all over myself and struggling to catch my breath, the kid, who showed no signs of even having an elevated heart rate, came up to me and said “very good” with a big, innocent smile on his face.

Once I re-gained my composure and caught my breath, I stepped into the ring and went through my usual 5 rounds of pad-work. We then moved on to the clinching and again, I’m not ashamed to admit – I got owned. As a matter of fact, it’s been a few days since I trained there and my neck still hurts. I guess that’s a testament to how effective Muay Thai actually is. Right now I weigh around 210lbs (formerly into bodybuilding) and I got tossed around the ring by a Thai guy who weighed no more than 170lbs.

It’s funny to think about all those “roided up” guys in the gyms thinking they’re tough based solely on the amount of weight they use when performing preacher curls. It’s not often you see the “juicepigs” of the gym performing neck extension exercises. It doesn’t matter how much someone can press, curl, row – whatever! If they get into a Thai clinch and get their neck pulled down (because it’s a weak-link for most people), they’ll be defenceless because where the neck/head goes, the body follows.

I learned that the hard way as my strength advantage was completely neutralized when I was “clinched up”. I’m just glad that it happened in training and not an actual fight or else I would have taken some serious knees to the face. Overall, it was a beneficial experience though as I now have an even greater appreciation for the art.

When training was over, I sat for about an hour or so and just talked to my trainer. He spoke very good English and as yet another testament to the hospitality of the Thai’s, he took me on a little tour through the house. He showed me some of the videos he had of the kids (wait, that sounded bad, let me re-phrase).. he showed me some photos and videos he had of the kids that train at the camp FIGHTING..

I then saw a trophy case and walked over to it. He followed and told me some of the stories behind each one. He then pointed to a championship belt that was lying next to the trophies and told me that he was “number 2” at lumpinee stadium back in the day. I guess that’s Thailand for you. Randomly stumble on a side-street camp and end up training with a formerly ranked fighter at lumpinee stadium. Overall, it was a really cool experience and although I only have a couple weeks left here in Pattaya, I think I’ll be going back.

Here’s a short video tour I took of the camp..

Now, in my last entry, I said I had some information on the status of a potential fight between Buakaw Por Pramuk and Yodsanklai Fairtex. Well, I didn’t say it was GOOD news. Although I’m sure the fight will eventually happen (just makes money sense), things are not looking good for the moment.

When training at Fairtex Pattaya, I was informed that Buakaw’s camp was on board at first providing they fought under K1 rules and not full Muay Thai rules. Now, it seems as though they have backed out because, as my source at Fairtex put it, Buakaw has too much to lose at the moment (with him coming off a KO loss at the hands of Yoshihiro Sato). Of course, that’s only one side to the story. Hopefully I’ll make my way to the Por Pramuk gym at some point and get their perspective on the potential match-up.