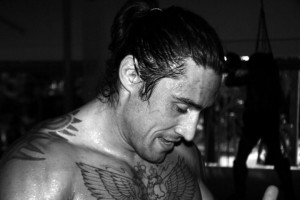 During my latest stint in Thailand, I met an up and coming fighter named Adil Abbas. If you look him up on Sherdog, you’ll see he has an unimpressive 1-1 record. Well, this is one of those instances where the numbers don’t tell the whole story. Adil is one of those guys who embodies the fighting spirit. Nothing else matters to him. He has a one track mind at the moment and it’s set on nothing but training, fighting and making it to the top.

Adil, or “Rambo” as he preferres to be called, flew down to Thailand again with me this time and to make things interesting, he only came with a limited supply of money so he’s been relying on training hard and fighting for his money to stay here. In his own words, he “doesn’t care of he has to live out in the middle of nowhere, shower using a bucket of water, earn 30 bucks per fight and catch food with his own hands”, he’s determined to make it in this sport and he’s willing to go to great lengths to achieve his goals, literally.

Of course, it’s not like he’ll have to “catch his own food” and the living conditions here are fine. He was just emphasizing that he’s at “now or never” point in his life and he’s determined to get where he wants to be, regardless of the hardships involved in getting there. I’m leading somewhere with this so keep reading. Here’s a little bit about “Rambo’s” training and fighting background..

In his very first pro MMA fight, he was pit up against Ryan Ford. For those of you who don’t know, Ryan Ford is an amazing, upcoming fighter out of Edmonton, Alberta who currently holds an impressive 13-3 record. When “Rambo” took that fight, he was training at the YMCA. Yes, you read that right.. THE YMCA!

So basically, without any professional instruction, he stepped up and fought Ryan Ford for his very first fight (talk about jumping into shark infested waters). He lost, and lost quickly, but it was the introduction to the sport that Adil needed for inspiration. Since then, he’s associated himself with a good camp training alongside guys like Sam Stout and Mark Hominick and he hasn’t lost a fight since. The fights, most of which aren’t officially registered because they’ve taken place in Indian reserves, have given “Rambo” some much needed experience.

While training at the Patong Boxing Gym last April, Adil tried to get on one of the fight cards that the promoter was putting together but was disappointed to learn that it was already full. Well, when one of the fighters pulled out only a couple days before fight night, I asked him if he wanted to fight and when I did, his eyes lit up like an 8 year old kid on Christmas morning and he agreed without hesitation. About 5 minutes later, he laced up his shoes and started running throughout the hills of Patong.

His fight turned out to be pretty epic. After he accepted it, I remember him telling me that he pictured a skinny, frightened little 19 year old Thai guy trembling with fear as he looked at him from across the ring and that “he would take it easy on him and carry him throughout the fight”. Well, when we were warming up in the back, we saw this Lebron James like Thai dude walk by in a white hoodie. When an onlooker pointed at him and told Adil that that’s who he was going to be fighting, his smile was immediately wiped off his face and he got this “shit just got real” look in his eye.

When him and his opponent were circling the ring as part of their Wai Khru, the announcer got on the microphone, introduced him and then introduced his opponent. Apparently when it was announced that his opponent had over 80 previous fights, Adil stopped in his tracks and had an “oh shit” expression on his face.

The fight turned out to be a 3 round war and despite being outsized, out-experienced and taking some heavy kicks to the face, Adil ended up catching his opponent with a devastating shot that knocked him out cold. It was a flashlight-in-the-eyes, “are you still alive?” sort of knockout. Here’s some footage of the fight, although it’s not the best quality..

Since we arrived here in Bangkok (nearly 3 months ago), “Rambo” has fought once at Rajadamnern stadium. Once again, he was told that it would be an “easy fight”, that he was fighting a retired fighter who’s now just a trainer and when he showed up for the weigh in, he noticed an older looking Thai guy sort of eyeing him down. So, he obviously figured that’s who he was fighting. He left the weigh in fully confident with a big smile on his face.

I didn’t end up going to watch since the admission prices here are bullshit. They charge “foreigners” about 5-10 times more than they charge Thai’s. Imagine if we decided to charge Thai people in our home countries 10x as much for things.. How do you think they would react to that? The duel pricing is one of the things that drives me crazy here.

Anyway, got a little sidetracked there. A few hours after “Rambo” left for his fight, I got a call from him and he said that it was the “hardest fight of his life”. He did NOT end up fighting the older trainer, but rather, a young, fit, muscular, tatted-up Thai fighter from Chuwattana gym. He obviously wasn’t expected to win, but ..he did. The Thai fighter blew out his shoulder in the 5th round and couldn’t continue, but not before he was able to catch “Rambo” with an elbow to the top of the head in the 3 round that split him open and required about 12 stitches to fix..

Now ..for the purpose of this entry. Once again, “Rambo” is being “thrown to the wolves” so to speak and once again, he would have had no idea until fight night. However, this time I decided to do a little research before hand. He’s flying to Paris, France in a few hours and he told me that he’s a late replacement for a Thai guy who had to drop out against a guy named Yohan.

Now, some of you may have put it together quicker than me but I had to Google a bit and yes, he’s fighting Yohan Lidon. You know..

The same Yohan Lidon that’s fighting Giorgio Petrosyan next month. So, to recap, before fighting Petrosyan – the winner of back-to-back K-1 Max championships – Yohan is fighting ..my buddy, who only has 2 pro Muay Thai fights. Obviously, this is meant to be a “tune up” fight for Yohan. However, as daunting of a task as fighting Yohan may be, this is a huge opportunity for Adil ..Ahem.. I mean, “Rambo”.

Picture “Rambo” as being the Muay Thai equivalent of Clay Guida. I always tell him that the wins on his record should read “via hyper-activity” as the method of victory. It’s somewhat freakish. He can go full-throttle for a full 5 rounds without slowing down. He’s not really a traditional Muay Thai fighter either since he comes from an MMA background so he’ll be able to throw some different techniques at Yohan and give him things that he hasn’t seen.

Regardless of the outcome, this fight is sure to be entertaining. Yohan has 77 pro Muay Thai fights (66 of which he’s been victorious in). He has 45 knockouts and he’s fought a who’s who list of top fighters. However, if I was betting on this, there’s now way I’d put money against “Rambo”. He may be heavily outmatched on paper, but “stats” aren’t always indicative of a fighters heart and desire to win – and knowing Adil Abbas on a personal level, he has plenty of both.