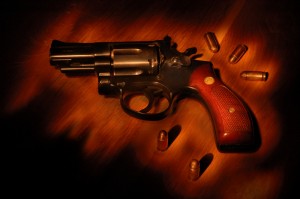 While this is a Muay Thai Blog, I figure things will get pretty boring if all I write about in my entries is skipping and hitting the heavy bag. My vision with this is to not only to document the training, but also, the entire experience of coming to foreign countries to train. As a single 25 year old guy, part of that experience is of course – the ladies that you meet throughout the journey.

Which brings me to a girl named “Fon”. I met Fon about 10 days ago through a mutual friend and of the 10 days that I’ve known her, she’s probably stayed over at my apartment for 8 of those nights. At first, things were great. The thing about most Thai girls I’ve met is that they really take care of you.

She would bring me food, clean my room, fold my clothes, give me massages (she’s a masseuse) and even cut my nails. I’ve met a few girls in Canada that were similar, but I’d say that Fon tops the list in terms of how she takes care of a man.

She’s actually very beautiful too. Sort of like a Thai Barbie doll. She has blonde highlights, implants, tongue ring, belly ring and she’s incredibly fit (most girls here are). Here’s a photo of her and her friend at the salon (Fon is to the left in the black dress). Honestly, this photo really doesn’t do her justice. I find that most Thai girls aren’t very photogenic. 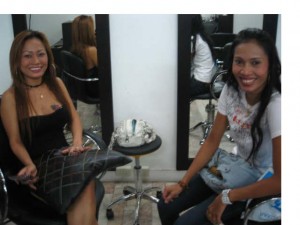 Anyway, about 5 days ago I was playing pool in a common area for the residents of the apartment and I was talking to one of the girls that works here (below is a nightclub). I told her that I was dealing with a girl and she almost immediately replied with “don’t say you love her”. That struck me as being somewhat of an odd comment and when I inquired as to why I shouldn’t say that (not that I’d say that anyway), she made the action of her throat being slit.

Literally about 15 minutes after the disturbing conversation, Fon sent me a text message and for the first time, after only knowing me for 5 days, she dropped the “L-bomb” (I love you). After what the girl at my apartment had just told me, I obviously didn’t return the affectionate words.

A couple days later, her best friend added me to msn and started asking me if “i love she” (poor English obviously) and when I tried to explain that I didn’t know Fon well enough to “love her” and that “love takes time to build” blah blah .. she really didn’t understand. After that conversion, she then tells Fon that I said I didn’t like her. Needless to say, that causes all sorts of drama.

Which Brings Us To Last Night

Since there’s no training on Sundays and I have nothing to do all day but sit around my room and well, type up these entries, I allow myself to go out on Saturday nights and have some fun. Due to how quick Fon was moving with things (her friend was even asking me about marrying her), I knew I had to slow things down a bit so when she asked me to go see her, I said that I just wanted some time alone.

Well, she didn’t take that very well. She literally started screaming “you come see me now!” on the phone. I declined. She then responded with “ok, I kill you now”. Obviously, the death threat didn’t sit well with me so I told her off, hung up, went to the bar and started talking to some new girls just to spite her. She called non-stop for about 2 hours straight so after about the fourth call, I turned the volume off, set it to vibrate and put my phone in my front pocket (I’m not going to lie, it felt kind of nice .. haha).

Curiosity eventually got the best of me and I ended up answering to see what she had to say. When I did, she just started rambling on about the most random things. “You want me die?” she asked. “Why you want me die?” she repeated. At this point, it became pretty clear that there’s something psychologically wrong with this girl. I never said, nor implied any such thing. She’s the psycho that threatened to kill me, not the other way around.

Based on the things she was saying, I was a little concerned that perhaps this girl could be suicidal. I also knew she had been drinking so I just tried to be as nice as I could and I reassured her that while tonight wouldn’t be a good time to meet up, I’d could see her tomorrow (today) to talk about things. I also told her that I had booked a room at the Mariott so she wouldn’t show up at my room later on (she had done so before).

While I was walking back to my room, we were sending texts back and fourth and she kept asking me where I was, and when I was going home. I made it to my apartment and all looked well. I was expecting her to be standing outside my building to make sure I didn’t have another girl with me or something but no, the coast was clear.

I walked up the stairs, unlocked the main door and entered the building. The second security measure is a password protected door so I went ahead and input my password. From there, I walked up another small flight of stairs and approached my apartment. While I was in the process of sticking in my key, the door was pulled open from the inside.

My heart rate shot up, my stomach dropped and I immediately jumped back a bit and got into a fighting stance with my right fist cocked back. She then peered her head around the corner. I immediately charged into the room and checked to make sure she didn’t have any sort of weapon in her hands. She didn’t.

I then did a quick search of the room and made sure the safe was still locked and that my laptop was still where it was stored. Nothing was gone. Actually, not only did she not rob me but.. she cleaned my room. But as nice of a gesture as that is, it doesn’t quite overshadow the death threat and the B & E (break & enter).

I told her straight up that I thought she was “ting tong” which translated from Thai to English, means she’s crazy. Her reaction to that was nothing more than a creepy laugh. I knew I really had to get this girl out of my room but at the same time, I wanted to stay on her good side because after all, if she was able to get into my room so easily, I’m sure she could do it again while I’m sleeping.

I told her I was hungry and that I wanted to go across the street to get some food. Prior to leaving my room, I grabbed her purse did a quick scan of my room to make sure she didn’t leave any of her belongings behind. She strongly objected to the fact that I was bringing all her stuff with me (she knew she wasn’t welcome back at this point) but too bad, I basically nudged her out the door, followed, and closed it a.s.a.p.

I really needed to know how she got into my room so while we were eating, I kept drilling her with questions. If this girl was able to pick locks, I’d basically have to change rooms, move to Bangkok, fly to Phuket – basically just get the hell out of here. She finally admitted that she didn’t pick the lock but rather, my neighbour let her into her room since she recognized her.

From my neighbours room, she basically went out onto the balcony (keep in mind she was pretty drunk) and climbed from her balcony onto mine. She then got into my room via my balcony door. I guess it was unlocked but in my defense, I really didn’t think anyone would be crazy enough to be balcony jumping from a few stories up.

Here’s a couple photos. The first is of my balcony in relation to my neighbors and the second is of the distance from my balcony to the ground level concrete. If she had fell, she would have sustained some pretty serious injuries. 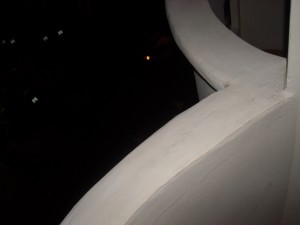 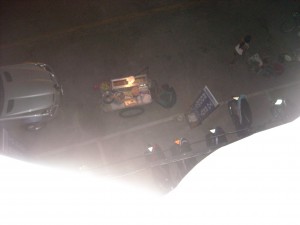 Right now it’s about 2am and I haven’t heard from her yet. I’m sure I’ll get a text message or a call within an hour or two though. I’ll give you guys an update on the situation in my next entry.

As for the Muay Thai, I’m still at it. I’ve been training at Scorpion gym lately and it’s been going really well. The owner (Rosalie) is cool. It’s on the baht bus route so it’s cheap to get there and the trainer I’m working with is pretty good about correcting my form. I’ll be here in Pattaya for another 10 days or so then I’ll be heading to Bangkok to check out Fairtex Bangplee, Kaewsamrit Gym and a few others.

..and of course, if you have any tips on how to deal with crazy girls, feel free to leave a comment..