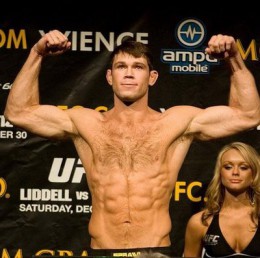 In the video below, Forrest Griffin discusses the different “schools of thought” regarding lifting weights specifically to enhance fight performance. Georges St. Pierre recently went on record by saying that he lifts weights specifically for “looks”, as he believes that it’s important to LOOK like a fighter for marketability purposes, but that he doesn’t think it enhances his performance at all. I don’t know if a buy that, seeing as how he has his own “strength and conditioning coach” in Jonathan Chaimberg, but I do agree that the fight specific training (technique etc) is what makes you a more effecient fighter.

For example, if you have two fighters.. One has superior technical skill and the other has superior strength, the more technical fighter will win the fight 9/10 times. However, if both fighters are equally skilled, then obviously, the stronger, better conditioned fighter will have a huge advantage. Skill + strength is a lethal combination so there’s no doubt that strength training should be part of every fighters training routine.

But how do you do it? Well, I really like the way Forrest Griffin broke it down in the video above. At the start of his training camp, he focuses on increasing his maximum strength (one rep max) on “functional” lifts. Mid-training camp, he shifts to a rep range of about 10-12 reps and mixes in some circuits to involve the cardiovascular system as well. And lastly, a few weeks out from his fight, he’ll switch to high rep, body weight exercises as he’s cutting weight in an effort to MAINTAIN the strength that he developed in the previous weeks of his program. It sounds pretty legit and it should serve as a blueprint for MMA athletes.

Without a doubt though, strength training IS important to enhance performance. After all, POWER is a combination of STRENGTH and SPEED. Both SPEED and MAX STRENGTH can be developed through a proper strength and conditioning program..