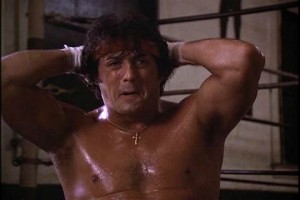 We’ve all seen the image – whether it be from a Nike or Gatorade ad or from a scene in pretty much any of the Rocky movies. The scene; an exhausted athlete/fighter with his feet hooked under a decline bench struggling to complete the final repetitions of his gruelling workout. He’s got sweat pouring out of every sweat gland, his shirt is soaked and the agony seen in his facial expressions resemble that of someone being tortured.

Sit ups seem to be the staple exercise for combat athletes. However, what most people don’t realize is that while sit-ups/crunches may be beneficial for certain aspects of the fight game, they’re not the be-all, end-all solution to torso training. In order to put together a “functional” core conditioning program, you need to have a basic understanding of the anatomy of the mid-section. Here’s a very brief overview..

The abdominals (“abs”) are what you are training with the more traditional exercises like sit ups and crunches. Leg raise movements also train the abdominals with additional recruitment from the hip flexors (muscles that move the leg upwards at the hip). Training the hip flexors is important as strong (not tight) hip flexors will enable you to deliver devastating knee strikes.

To enhance the effectiveness of the traditional crunch-type exercises, you may want to have a partner drop a light medicine ball on your stomach as you perform the movement and toss it back up to him as you move to an elevated position. This will make the movement more “MMA specific” as it will strengthen the abdominal region and better prepare you to withstand those “body-shots” to the mid-section. You can also perform crunches with your feet next to a long punching bag and as you move to an elevated position, rotate and deliver two punches to the bag. The rotary movement brings us to the next muscle group ..

The obliques (both internal and external) are extremely functional as they work together to rotate the torso. A large percentage of your strength training workouts should be designed with the goal of increasing your rotary strength as it translates to pretty much all of the movements you do in MMA. Here is a brief breakdown of some MMA related movements that will be improved through the implementation of rotary exercises..

Punches: Punching power stems not just from the chest, shoulders and arms, but even more importantly – the rotary strength of the core. If you were to analyze your punches, whether it be a hook or an uppercut; an overhand right or even a jab – you’d realize that the they all involve a rotation of the core (some more than others.)

Mount Escapes: One mount escape involves bucking your opponent upwards, trapping an arm, hooking a leg and rolling him over. As with punches, your efficiency to do so relies on the rotary strength of your core.

Kicking: Kicking; whether it be a spinning back kick or one of those powerful Thai-style kicks that involve turning your hips over to increase the force of the impact – it’s all dependant on core strength. The greater the rotary strength of the core, the greater the force of the kick. It’s really that simple.

The often-overlooked transversus abdominus muscle helps stabilize the core (along with other muscles) and plays an important role in the breathing sequence. There’s a technique known as “setting the abdominals” that activates the transversus abdominus. To perform the technique, you simply inhale, tighten your stomach, then exhale while keeping your stomach tight/flat. If you were to perform crunches using this “abdominal set”, you would rotate the pelvis forward as doing so will emphasize the natural curve of your lower back.

Beyond the obvious benefits, a strong lower back will do wonders for your MMA game (particularly while grappling). Whether you’re trying to posture up from your opponents guard or escape from a triangle choke (Rampage vs. Arona style) – a strong lower back is key. When you’re training the lower back, try to make the exercises as functional as possible. Deadlifts are excellent as they mimic specific movements that are commonly performed in MMA competition.

If you’re a little confused as to which MMA-specific exercises you should be performing, you can keep checking back as we’ll be posting workouts in the near future. If you want a comprehensive encyclopedia-like guide on all sorts of specific core exercises for combat athletes – just CLICK HERE!

Here is a brief preview of the “combat core” book and DVD series.

GET THE DETAILS HERE!