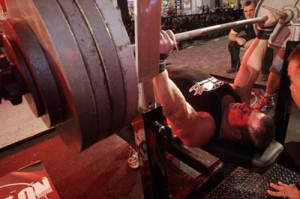 “Hey man, what do you bench?” – A question that has seemingly become an indicator of male dominance. I was pretty strong coming up through high school and because I could bench press more than the other guys in my grade, I had that false sense of invincibility that most people only get when they’re drunk. If I could press 3 plates and another guy could only do 2 and a half, I automatically assumed I could kick his ass. By the same token, if I was pressing 315lbs and another guy at the gym was doing 330lbs, I’d get a feeling of inadequacy and immediately go home and Google what new, “scientific breakthrough” supplements I could take in order to get my bench press up. If he was bench pressing 330lbs, then I wanted to be bench pressing 335lbs – because that meant I could kick his ass (so I thought).

Fast forward a few years to my first MMA class and the first time I rolled against someone skilled in the art of Brazilian Jiu Jitsu. What happened was obvious as I’m sure it happens to about 99% of the inexperienced, egotistical males that step into the dojo for the first time. I got triangled, arm-barred, knee-barred and kimura’d to the point where it was as if I was playing the drums (minus the drum set) since I spent the entire session slapping the mat.

I now realize that the bench press exercise is not the be-all, end-all indicator of fighting ability. As a matter of fact, I realize that it has very little to do with fighting ability at all. Perhaps the two “strongest” MMA fighters in terms of how much they bench press are Tank Abbott and Houston Alexander and both of those fighters are riding major losing streaks. Check out Tank putting up 6 plates per side in this video..

However, with that being said, when either of those two fighters (Abbott & Alexander) connect, the result is admittedly devastating. Tank has literally sent his opponents into convulsions and we all saw what Houston Alexander did to Keith Jardine with that series of uppercuts.

So perhaps there IS something to it?

When you’re performing the bench press, you’re recruiting the chest, the triceps and the front of the shoulder (anterior deltoid). These muscles, along with many others (particularly those of the core), play a major role when it comes to generating powerful punches. Of course, keep in mind that power is a combination of both speed and strength so oftentimes you’ll see a strong, muscular guy hitting the pads and because he’s so slow, the “power” just isn’t there. By the same token, a quick, yet physically weak fighter will also be unable to generate a decent amount of power. If one of the necessary components for power generation is missing (speed, strength or technique) – the sort of devastating knockout power that guys like Tank and Alexander possess simply won’t be there.

I find the bench press – as well as other chest press movements – to be an excellent way to develop both the speed and strength necessary to deliver powerful punches. As for the third component; the technique – that will eventually come via your specific combat training. Here’s a guideline on how to use chest press movements to help develop both your punching power and endurance.

Training specifically for strength requires you to implement heavy loads as maximum strength is highly dependant on neural efficiency. Heavy loading will train your nervous system to recruit a higher percentage of motor units – thus muscle fibers – to aid with the muscular contraction. Since maximum lifting is harder on your nervous system, you must allow for a longer rest interval between sets as neural recovery occurs at a slower rate than muscular recovery does.

What good is having powerful punches if you can’t maintain that power beyond the first round, or in many cases, beyond the first flurry? Sure, you may be able to get a quick knockout but if your opponent is able to “weather the storm” – as UFC commentator Mike Goldberg says in seemingly every broadcast – the chances of you landing a knockout shot in the later rounds will be minimal if you don’t train for muscular endurance.

Fatigue in MMA has a lot to do with the accumulation of lactic acid so in order to prevent that, you need to train at a high intensity to increase what’s known as your lactate threshold. You can read more about lactic acid and how to train within the different “energy systems” by clicking here.

However, it may also be beneficial to increase the local endurance of select muscle groups. In this case, the muscle groups that are recruited via the bench press and likewise, some of primary muscles that are responsible for punching power. I recommend that you alter your rep ranges so you not only train for general muscular endurance but also, strength endurance as well. Here are some guidelines for each..

Use a rep range of between 8-12 (similar to bodybuilding)
Use drop sets (once fatigued, strip off approx. 15% of the weight and continue)
Perform your set, rest 30-60 seconds, then continue.

High repetitions (15 and up)
Minimal rest (30 seconds or less)
For the bench press specifically, you can attempt to press only the barbell for 100 repetitions.

It should go without saying that your training should always reflect your training goal. If you’re training for speed, then it only makes sense to perform the movement at a fast pace. For the bench press specifically, you can lower the barbell down to the chest slowly but you want to ensure that the concentric portion (driving the bar upwards) be performed in an explosive fashion. Bands and chains can also be used to provide what’s known as “variable resistance”. This will ensure constant, progressive resistance throughout the concentric motion.

Plyometrics are perhaps the most famous method of improving speed and explosiveness. It’s tough to perform plyometrics with a standard barbell bench press, however, a plyometric version can be performed using the smith machine. For this variation, you’ll need to load the end of the barbell with only about 25% of your one-rep-max. Basically, you’re going to be throwing the barbell upwards in an explosive fashion, catching it and repeating the movement. Here’s a video clip..

If you’d like to learn more about other exercises (besides the bench press) that can be implemented to increase the power of your punches, check this article out. Another easy-to-perform exercise that translates well over to increasing hand speed is clapping push ups. I’m sure you’ve seen it before. Rather than simply pushing yourself back up, you explode and clap your hands together before you perform the next repetition.

Also, the most important muscle groups in terms of MMA performance are the rotary and bracing muscles of the core. You can access a comprehensive core-training resource designed specifically for combat athletes by clicking here.