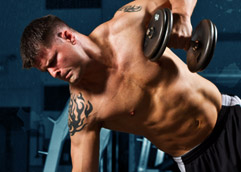 Last night, Brian Stann knocked out Jorge Santiago and moved one step closer to securing a shot at the middleweight title. Given his successful military background and the fact that the UFC has a partnership with the US marines (as you may have noticed from the recruitment ads that are running on every UFC pay per view), you can bet that Brian Stann will be getting a lot of hype and exposure in the near future. I mean, George Bush personally thanked him in one of his presidential speeches! There’s no way this guy isn’t going to be a huge in the sport due to his marketability.

Not only is he a good fighter, but he’s a good speaker as well. He seems like a pretty serious dude and with guys like him, you can tell he’s spent a lot of time in the military. It’s obvious just be the way he carries himself. Anyway, in the video below, Stann discusses his entire fight preperation process and overall lifestyle. He covers his training, his mindset, his nutrition and his supplementation. It’s a great video so check it out..