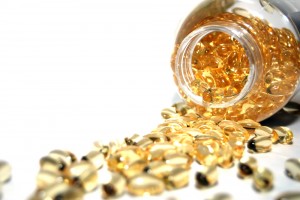 With the popularity of mixed martial arts on the rise, some of the major supplement companies have already started to market their products to the MMA community. BSN: the official supplements of the UFC” – a catchphrase that has recently graced both the octagon canvas and the UFC website. But do their products truly benefit the mixed martial artist or is it nothing more than a well timed marketing gimmick. Well, most of the more popular supplements that have been used for bodybuilding and fat loss can benefit fighters and all sorts of athletes in general. Products like creatine, protein and beta-alanine are all musts for MMA fighters.

Throughout my years as a trainer, I would often get asked what the “best supplement” is. You would think that my answer would be “it depends on your goal and dietary deficiencies” – or something along those lines. Well, my automatic response to the ever-so-popular question would more often than not be – “essential fatty acids”. Why? Because they benefit everyone, regardless of their training goal. Not only that, but almost everyone who doesn’t supplement with fatty acids is deficient in omega 3’s. Goals and deficiencies – essential fatty acids got you covered.

What Are Omega 3’s Anyway?

Omega 3’s are polyunsaturated fats that are typically under-consumed in modern-day diets. This deficiency amongst the majority of the population makes supplementation essential. Alpha-linolenic acid (ALA), which is the main component of an omega 3 fatty acid, along with its bi-products (EPA) and (DHA) have a vast amount of positive effects throughout the body. EPA and DHA are simply elongated, de-saturated versions of alpha-linolenic acid (ALA). These ALA subdivisions are known as “fat burning fats”.

Both EPA and DHA help reduce your body’s insulin response following your meals. This notable attribute will help prevent fat storage. In addition to minimizing the insulin response to select foods, they have also been shown to boost your metabolic rate. They accomplish this by triggering a thermogenic response – meaning your body’s core temperature increases. This increased heat production occurs at the cellular level and will, in a sense, rev up your metabolic furnace and allow you to burn more calories throughout the day – even during periods when fat burning would normally be inhibited.

And What About Those Omega 6’s?

Omega 6’s are also polyunsaturated. While most publications state that the typical North American diet contains an adequate amount of omega 6’s, it is important to remember that all omega 6 fatty acids are not created equally. The main component of an omega 6 fatty acid is termed “linolenic acid” (LA) and from that, it’s bi-products gamma-linolenic acid (GLA) and (AA) are created. However, keep in mind that consuming adequate amounts of LA does not ensure that adequate amounts of GLA will be created. Each of these omega 6’s have different effects and appear in different amounts in the foods we consume. Eggs, fish, meat and other common foods contain adequate amounts of AA. We don’t need to supplement with LA either as we get enough of it in our diets as well. GLA (Gamma-Linolenic Acid) however, tends to be under-consumed and supplementation is necessary to prevent deficiency. Evening primrose and borage oil are both rich in GLA. There are also oil blends that exist on the market that include various fatty acids in the proper ratios. These products eliminate the guesswork and ensure that your fatty acid requirements are easily met. “Udo’s Oil Blend” is one of the top fatty acid blends on the market.

The over-consumption of omega 6’s in relation to 3’s can lead to serious problems. An ideal ratio to shoot for would be between a 2-to-1 and a 4-to-1 of omega 6’s to omega 3’s. Many of us consume a ratio of up to 20:1. This omega balance is starting to get more and more attention amongst the fitness industry as of late. Even Health Canada has addressed the problem and has put out the ratio of 4:1. Although this ratio serves as a good guideline, particular attention needs to be paid to taking in enough GLA (as mentioned above). If this ratio is out of whack, as it is with the majority of the population, the chance of developing cancer is increased. When high amounts of the omega 6 (LA) are consumed, the growth and division of cancer cells is increased. Theoretically, the logical prevention would be to limit the amount of omega 6’s. The downside to this solution is that we require omega 6’s – particularly GLA, for numerous health benefits. The second and more effective solution is to simply increase your omega 3 intake. While linolenic acid increases the growth and division of cancer cells, omega 3 exposure to these same cells causes them to either die or be destroyed. Considering the prevalence of cancer in today’s society, this in itself is more than enough reason to supplement with omega 3’s.

That’s all great and all, but how will essential fatty acids help me as a fighter?

Bodybuilders also supplement with essential fatty acids to reap the benefits of the anti-inflammatory effects. A bodybuilding workout will oftentimes implement dozens of sets with the goal of stimulating a microscopic breakdown of the tissues. It’s during the recovery period that the muscle fibers adapt to the training stimulus by becoming stronger for the next workout.

Well, if you’re serious about your MMA workouts, it’s a pretty safe bet that you’re spending more time training than the average “bodybuilder” out there who’s trying to pack on some beach-bulk to impress the ladies. In which case, you can certainly benefit from the anti-inflammatory properties of essential fatty acids. Your recovery time will be sped up, your injuries will be minimized and you’ll likely feel more refreshed from workout to workout.

Anyone who’s ever rolled against a resisting opponent for 2+ minutes or done a few rounds of pad-work or sparring knows that the most important muscle for MMA isn’t your biceps, nor is it your triceps – it’s your heart. Good cardio is the best weapon you can bring with you into a fight. Relating back to cholesterol, supplementing with essential fatty acids will help you cleanse your arteries, which will reduce the workload on your heart as it’s trying to deliver blood (oxygen) to your working muscles. When people consume a lot of processed foods or foods that contain high concentrations of long chain saturated fats, it increases the LDL (low density lipoprotein) cholesterol that binds to the arteries, thus narrowing the pathway that the blood has to travel through. This strains the heart and increases your blood pressure.

The good HDL (high density lipoprotein) cholesterol that is increased via supplementation with essential fatty acids removes the LDL cholesterol gunk that has binded itself to the artery walls. Of course, less corrosion around the arteries will make it much easier for your heart to deliver blood and oxygen to your working muscles. Making things easier on your heart will allow you to train at higher intensities and for longer durations prior to fatiguing.

To Wrap It Up

Supplementing with essential fatty acids will..