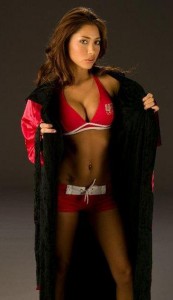 Aside from the rapid beat of your heart, the room is dead silent. You’re sitting there trying to focus; trying to mentally prepare for your toughest opponent to date. The clock ticks and you look up to realize that you have a mere ten minutes before you have to step up and embrace the greatest challenge you’ll ever face. All the sweat; all the sacrifice; it’s all been for this very moment. You’ve gone over every possible outcome over and over in your head.

Tick, Tick.. the clock continues to wind down and you have eight minutes to go. Nervousness hits an all time high; your heart starts pumping even faster and you feel the butterfly’s in your stomach. The anxiety is too much to handle and you’re just about to get sick when you hear a light knocking at the door. The much needed distraction holds back the vomit.

You compose yourself enough to make your way to your dressing room door. You open it, and standing there is the sexiest ring girl you’ve ever seen – Arianny Celeste. You see, the chemistry between the two of you was so strong at the weigh-ins that you dreamt about her last night.

“You’re all I think about” she says, “ I can’t get you off my mind”. She then proceeds to rub your chest and kiss your neck. You have a decision to make. Do you postpone the hook-up as a caution until the event is over or do you go at it, right there in the change-room knowing that the time restriction makes for a perfect excuse for “finishing” too fast? I mean, it is Arianny Celeste – it’s bound to happen.

Well, let’s be honest; this is a no-brainer. I highly doubt any straight guys with remotely functional vision would give Arianny the boot; I know I wouldn’t. But what sort of effects, if any, would this have on the upcoming performance. Would it hinder or help? The topic of sex on performance definitely deserves a closer look.

It’s been long believed that engaging in sexual activity prior to competition negatively effects your performance. A good friend of mine mentioned that his football coach encouraged his team to abstain from sexual contact for a few days before every game. Even Mohammed Ali has said that he avoided having sex for a full six weeks before his fights. Paul Lezenby; a professional kick-boxer, has made a similar claim. “ I don’t have sex for a month before my fights” he recently stated in an internet forum discussion. Well, the theories as to why these athletes practice pre-competition abstinence are as follows..

As you may have guessed, the facts differ significantly from the myths – which is usually the case. While many athletes have gone on record by saying they avoid sexual encounters before show-time, an equal amount are advocators of pre-event romps. One of basketballs greats – Wilt Chamberland – is equally as famous for his claim to having slept with over 20,000 women as he is for scoring 100 pts. in a single game. Twenty-thousand women; that averages out to more than a different girl, every night, from the age of 15. An astonishing number when you think about it, yet his promiscuous ways clearly didn’t have a detrimental effect on his on-court performance. Actually, a quick glance over the facts below makes it quite clear that his lifestyle may have even improved his game.

Whether or not pre-competition sex is beneficial from a psychological standpoint is highly individual. For some; it’s a positive – for others; it’s a negative. Some may find it a welcome distraction to calm their nerves and alleviate anxiety while others may find the distraction to be counter-productive and would rather focus on nothing but their upcoming performance.

Find out what works best for you, but never try new things right before competition – stick with what works. The time to experiment is during periods of training. Another factor that should also be considered is how sex effects your sleeping habits. With so many athletes being unable to get a good night sleep the night before competition, sex may help to increase relaxation and improve sleep quality.

All things considered, pre-competition sex has not been shown to negatively effect performance. Rather, it actually may help – although everyone is different so it’s best to find out what works for you, and stick with that. Through experimentation, if you find that sex enhances your performance, you just better hope that you don’t hit a dry spell before your next event. Hmm.. maybe we should throw up a few articles on how to pick up women just in case.

I came across these videos on youtube. The show is called “sport science” and in this episode, they perform a number of tests (punching power, leg strength, cardiovascular endurance and testosterone levels) on a heavyweight boxer both before, and then after having sex. Check it out. Even Bas Rutten believes in “Boom Boom” before fights.