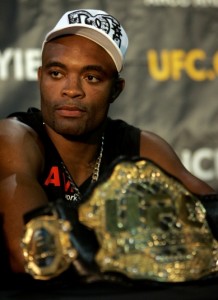 So Fedor and Anderson Silva just ran through their opponents without even getting hit. Georges St. Pierre just racked up another impressive victory over Jon Fitch, who before facing St. Pierre, was riding a 15 fight win streak (8 straight UFC wins). Then there’s BJ “The Prodigy” Penn. Every time I watch BJ fight I’m impressed. Some of the things you see BJ Penn pull off in his fights leave you scratching your head in amazement.

So, right now we have 4 fighters that are seemingly untouchable within their divisions. I don’t see BJ Penn losing at lightweight, nor do I see GSP losing at welterweight. Anderson Silva has basically torn through the entire UFC middleweight division and Fedor, well, Fedor seems to be in a league of his own – he just doesn’t lose.

Every time any one of these fighters win (which is pretty much every time they fight), the forums explode with people convinced that fighter-X is the best pound for pound fighter. To be honest, I doubt that 80% of the people making the claims even know what “pound for pound” means.

The term “pound for pound” refers to a fighters strength and skill-set in relation to his size. If for example, BJ Penn (currently fighting at 155 lbs) is considered to be the worlds best “pound for pound” fighter, it does not mean that he can beat Fedor Emelianenko (who fights at approximately 230 lbs).

So who’s the best “pound for pound” fighter? Honestly, who cares? Fedor is the undefeated heavyweight. If you had to class only one man as the “baddest dude on the planet” – it’s Fedor. All four fighters (Fedor, Silva, GSP and Penn) possess nearly perfect skill sets. When the technical skills, cardiovascular conditioning and determination (heart) of two fighters is equal, the decisive factor is almost always size and strength.

But just for the sake of the argument, let’s analyze the fighters and determine who takes the “pound for pound” crown.

BJ Penn: BJ has looked incredible in this last 3 fights. It appears as if he’s really taking his training and conditioning seriously now and to quote Dana White, “an in-shape BJ Penn is a scary dude”. Unfortunately, we can immediately eliminate BJ from the pound-for-pound contention (at least for now) seeing as how Matt Hughes put him in a crucifix pounded his head repeatedly into the octagon canvas like he was violently dribbling a basketball. And of course, he lost to GSP. We’ll see how the re-match turns out now that Penn determined and back in shape.

Georges St. Pierre: Sherdog just posted a similar article profiling the pound-for-pound contenders and the author awarded GSP the crown. Not surprising. I mean, he’s the latest to fight. Like I said before, people seem to get pretty excited when these fighters win and everyone starts making the “Oh my god, (insert fighter name here) is the best ever!” claims.

I can’t completely knock the article though. I mean, the author did bring up some legit points. George St. Pierre has torn through some tough competition with ease. He’s lost twice, but he’s avenged both losses in convincing fashion, so technically, he’s beat everyone that he’s ever faced.

He’s extremely well rounded. He’s been out-wrestling the divisions top wrestlers and passing the guards of BJJ black belts like butter. His stand-up is crisp and on top of all that, he’s freakishly strong. He’s got it all. GSP is a perfect fighter.

Anderson Silva: Anderson’s stand-up skills are just scary. What’s most impressive to me is the way he switches in and out of his fight stances. For someone to be able to transition between a southpaw and conventional stance the way Anderson can – it’s just amazing. With a guy like Anderson, you’d figure the game-plan would be to get the fight to the ground as quickly as possible, but that’s not even much of an option – he’s got a BJJ black belt from the Nogueira brothers.

If there’s any weakness, it’s his wrestling. If a decent wrestler wanted to take him down (as we saw with Henderson), they wouldn’t have any problems taking the fight to the ground. By the same token, if Silva was being out-struck (which doesn’t exactly happen), he would likely have difficulties securing a takedown on anyone with decent takedown defence.

You really have to respect Silva’s decision to fight in both the 185 and the 205 division. The fact that he moved up in weight rather than down just shows what a warrior he is. Brandon Vera made the cocky claim that he would be the first UFC fighter to hold titles in two weight divisions at the same time and it doesn’t exactly look like that’s going to happen for him anytime soon. But for Silva on the other hand, it’s a definite possibility.

Fedor Emelianenko: When you’re at the top, you’re bound to have haters. Everyone is constantly criticizing Fedor’s level of competition. If you back-track and analyze his past fights, his opponents weren’t pushovers at all (for Fedor maybe, but not to the average MMA fighter).

When Fedor fought Lindland, Lindland was, at the time, the top ranked middleweight fighter in the world (sort of like how Anderson Silva is right now). People dismissed him as legit competition saying that he was 2 weight classes below Fedor (even though they were within 10lbs of each other when they fought). Fedor won and people claimed that it was because he grabbed the ropes (he did NOT grab the ropes!).

Before Lindland, Fedor fought Mark Hunt, who again, people dismissed as legit competition. I don’t understand how fighting someone who has almost a 100lb weight advantage and has victories over MMA’s elite in Mirko Cro Cop and Wanderlei Silva gets dismissed as a “can”. Fedor wins again – people still criticize.

After Lindland, Fedor fights Hong Man Choi who while inexperienced, is a threat to anyone. Choi is an accomplished K1 level kickboxer and although he only had 1 MMA fight prior to his fight with Fedor, that one fight that he had ended with a devastating first round knockout. Do I think that Choi deserved a shot at Fedor so early in his MMA career – absolutely not! But do I think that Choi is an easy win for most heavyweights out there – absolutely not.

In his latest fight, Fedor dispatched of multi-time UFC heavyweight champion Tim Sylvia in quick, devastating fashion. If you go through all of Fedor’s fights, you’ll see that Fedor is always just a little bit more technical, quicker and smarter than his opponents. It’s almost as if he’s on an entirely different level. His only loss, back in 2000, was due to a cut from what was actually an illegal strike. He later avenged that “loss”.

As a matter of fact, I don’t think Fedor has even lost a round in the last 8 and a half years. Not since his fight with Ricardo Arona in the Rings promotion. It should also be noted that in Rings, Fedor wasn’t allowed to implement his “ground and pound” techniques that he’s known for. If the rules had been different, who knows, perhaps Fedor never would have even lost a round to date.

So all things considered, who’s the best pound for pound fighter?

Everyone is going to have their own opinion on this. It’s not one of these questions that has a concrete answer. It’s all a matter of opinion. I’m writing this article so I’ll say that in my personal opinion, I think that Fedor Emelianenko is not only the best overall fighter in the world (weight not being a factor), but also, I think he’s the best “pound for pound” fighter as well.

What do you think?

Leave a comment below and state your case for who you believe is the best..