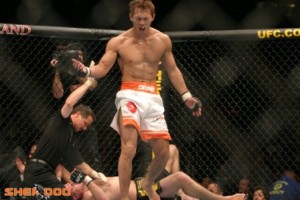 Vitor Belfort was presumed to be next in line for a shot at Anderson Silva’s middleweight title based on how easily he dispatched Rich Franklin back at UFC 103. Well, things change and since Chael Sonnen put on an incredible performance – though in a losing effort – against Silva, the UFC is going to give him an immediate rematch and market the hell out of “Silva vs. Sonnen 2”.

Vitor Belfort got moved to the back seat so to speak but considering that he originally earned the “presumed” title shot off a single UFC win, it’s understandable. Yushin Okami has won 5 of his last 6 fights in the octagon so this is the perfect match up to determine the number 1 contender.

As for how these two match up, well, it goes without saying that Vitor Belfort is the better striker. Known as “the phenom” for a reason, his hand speed, power and overall boxing skills are unrivalled in the division. One shot from Vitor and you’ll be laid out on the canvas – just ask Matt Lindland or Rich Franklin.

Given the power in his hands, the obvious game plan with Vitor would be to get him to the ground but even once you do, you’re not entirely out of the water since he’s a black belt in Brazilian Jiu Jitsu. If anything, the blueprint to defeating Vitor Belfort would be to control him using superior wrestling skills the way that Randy Couture and Tito Ortiz did.

Yushin Okami is a pretty decent wrestler, but he’s certainly not on the level of Couture, Ortiz or as we witnessed at UFC 104, Chael Sonnen. So, whether or not he’s going to be able to outwrestle Belfort is an issue. Vitor Belfort has never been out-struck either and I doubt that Okami will be the guy to do it.

When the odds come out for this, I predict that Yushin Okami, even being as talented as he is, will be the underdog. Okami is one of the top ranked fighters in the world but today’s Vitor Belfort, under the tutelage of Shawn Tompkins, has looked unstoppable. Even Chael Sonnen admitted to being a Belfort fan and said that he would be a much harder fight for him than Anderson Silva. Keep in mind of course, that Chael is the guy who absolutely dominated Okami at UFC 104.

Regardless of who’s better at a certain element of fighting, both of these guys fight with a lot of heart and neither has ever been involved in a boring fight. This is a awesome number 1 contender fight and to make it even better, it’s not even going to be a pay per view. So, on November 13th, make sure you’re tuned into Spike TV to watch Belfort and Okami throwing bombs at each other in front of the German crowd.