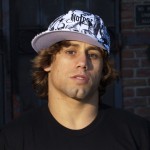 Urijah Faber is set to take on Dominick Cruz at UFC 132 and with the fight being just a week away, there’s been a bunch of cool hype videos that are being released but this one (while it doesn’t do much to hype the actual fight with Cruz) is by far the best. It features Urijah Faber himself and someone named “Jareb Dauplaise” from something called the “Jareb Show”. While I’m not too familiar with his work, it seems as though pissing off and taking beatings from MMA fighters is sort of his “niche”.

Anyway, the skit in the following video is pretty funny as he heads into Urijah Faber’s gym after talking a bunch of trash to him while playing the UFC game online. When Urijah finds out who he is, his mood changes and as soon as he gets “Jared” to sign the waiver, the beatdown ensues. It’s pretty well done so check it out..