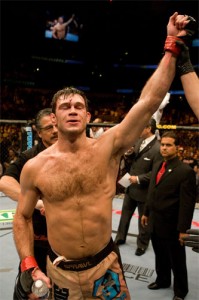 Who would have thought the ultimate fighter reality series would produce so much talent. As a matter of fact, up until only recently, being a contestant on the show was almost looked down upon by the non-reality series UFC roster.

Well, thanks to guys like Forrest Griffin and Rashad Evans, fighters coming off the show and into the UFC are now getting a lot more respect. Having both recently taken out former top ranked fighters – Forrest over “Shogun” and Rashad over Liddell – this showdown will certainly be interesting.

I’m calling this this as the fight of the night right now – and that’s saying a lot considering just how stacked UFC 92 is. As we all already know, Forrest Griffin is a workaholic warrior who just keeps pressing forward. It’s that never-say-die mentality that has got him where he is today.

Forrest Griffin isn’t the greatest wrestler, he isn’t the greatest striker, nor is he the best submission artist – yet he’s the champion in arguably the most competitive division in the UFC. How does that happen? Well, it happens as a result of work ethic and “heart”.

Rashad Evans – who up until this point has yet to be defeated in his 13 fight MMA career – embodies similar characteristics. Having gone to decision in nearly half of his fights, he’s no stranger to going into “deep waters” with a game opponent – which will likely happen against a guy like Forrest Griffin.

So How Do Forrest Griffin and Rashad Evans Match Up?

Neither of these guys is a “master” in a specific fighting style. They’re both just well rounded, really tough guys with a lot of heart. If there’s any standout advantage, it would be Rashad with his wrestling ability. Rashad is a much better wrestler than Forrest – and most of the light heavyweight division for that matter.

As for whether or not it will make a big difference in the fight, I’m not so sure. While Rashad Evans is the better wrestler, Forrest Griffin will likely be the bigger of the two as he walks around and cuts weight from around 240lbs while Rashad looked pretty small compared to Chuck Liddell in his last fight.

Of course, you could throw a wrench in that theory by pointing out that Rashad used to fight (and toss guys around) at heavyweight. Just look how Rashad was able repeatedly slam Stephan Bonnar when they fought back in 2006.

Both Forrest Griffin and Rashad Evans are fighting out of great camps so you can rest assured that they’ll both be entering the octagon with very detailed game plans. And speaking of strategy, one thing worth pointing out is the fact that the last man to defeat Forrest Griffin was Keith Jardine – who just so happens to be one of Rashad’s team-mates.

This is one of those fights where it’s extremely hard to predict a winner. The only sure thing in this fight is that both fighters will give it their all and of course, Rashad’s wife will be sitting somewhere within the first few rows screaming at the top of her lungs.