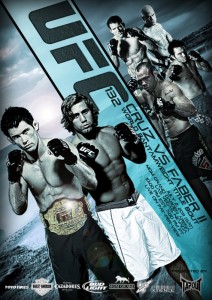 These extended countdown shows, for the most part, do a pretty good job at getting me hyped up to watch the event. This one is no exception! The show starts off by showcasing a bit of the backstory between Dominick Cruz and Urijah Faber. You know, about how they’ve fought in the past, how much Dominick Cruz has matured and improved since the loss and how they genuinely dislike each other. Both of these guys push an extremely fast pace so there’s no way I can see this fight being boring. A title fight with 2 aggressive and technical fighters = guaranteed entertainment for the fans.

The second fight that they profile in the countdown show is between Chris Leben and Wanderlei Silva. When describing the potential of the fight, Joe Rogan says that it could potentially be the “fight of the decade”. That’s probably a bit of a reach but yet again, this is a fight that I just can’t see being slow paced and “boring”. Like Dominick Cruz and Urijah Faber, Leben and Silva are both extremely aggressive fighters and they’re both “brawlers” as opposed to coming in with elaborate “game plans” and trying to squeek out a win. They both come to FIGHT and that’s exactly what we’re going to see on Saturday night. I’m stoked for this one as well.

The final fights that they profile are between Tito Ortiz and Ryan Bader – which will be interesting (but potentially boring due to their “grinding” wrestling style) and lastly, the fight between Carlos Condit and Dong Hyun Kim (who’s on a 5 fight winning streak in the UFC). In the pre-fight interviews, Condit delivers the epic line of “there’s 1 way to put a stop to someone’s winning streak .. you know him the fuck out”. But what else would you expect someone nicknamed the “natural born killer” to say? All in all, this card is stacked with potentially awesome fights. Check out the countdown show..