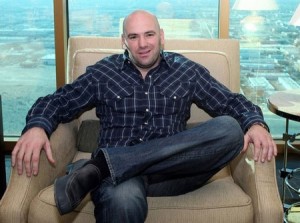 Dana White just put out his first video blog to hype up the UFC 131 event that’s taking place this weekend in Vancouver, Canada. It’s more of the usual, which is surprisingly eventful considering these video blogs consist of a camera man just following him around. At the start of the video, Dana gives a set of tickets away to a couple guys who got scammed by someone that sold them counterfit tickets on craigslist.

From then on, it’s a bunch of star-sighting as Dana chats with Ice-T and Michael Vick and even shows off Couture’s new replacement teeth. To finish things off, he gets a few predictions from next season’s TUF coaches Michael Bisping and Jason Miller. Bisping picked Dos Santos to win and Miller picked Carwin. Both guys had pretty good arguements as to why their selected fighter would win as well. Check it out..