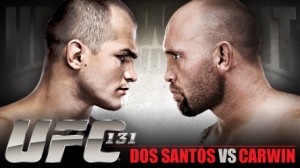 The “countdown” show was put online a few hours ago to hype up the UFC 131 event that’s being held in Vancouver, Canada this Saturday night. Until watching it, I was stoked about watching the Shane Carwin vs Junior Dos Santos main event but I wasn’t excited for any of the fights on the undercard. After watching the countdown show, I’m pretty interested to see how Kenny Florian performs at 145lbs. That fight against Nunes seems like it’s going to be awesome.

Mark Munoz vs Demian Maia seems pretty interesting as well because it seems like an awesome Wrestling vs BJJ showdown. As for Shane Carwin, all I can saw is that he seems VERY confident based his pre-fight statements. Junior Dos Santos has been near perfect so far in his UFC career and I imagine he’d be a pretty scary dude to fight so perhaps all the talk Carwin is doing is his way of hyping himself up and building up his confidence. If Carwin is smart though, he shouldn’t stand and trade with Dos Santos at all. I think he needs to get Dos Santos – the best boxer in the heavyweight division – down to the ground as soon as he can. With his wrestling ability, he’d be foolish to trade with a guy as fast and as powerful as Dos Santos. Not to mention the fact that Dos Santos is the taller of the two and likely has a reach advantage. Anyway, here’s the full length countdown to UFC 131..