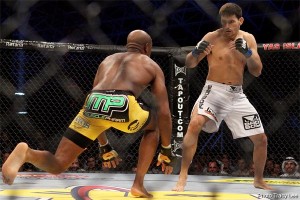 Anderson Silva; who’s still regarded by many as the top pound for pound fighter in the world, will square off against Chael Sonnen at UFC 117. Anderson Silva, as we all know, has lost his good standing with Dana White and White has even gone on record by saying that if Anderson Silva doesn’t start fighting to his ability soon, he’ll be cut from the organization (and rightfully so).

Anderson Silva was hesitant to engage against Damien Maia in the latter portion of their fight last month in Abu Dhabi. His dismal, uninspired performance left many fans confused, angry and disappointed – as this was the second time the alleged “pound for pound king” has blew a main event and caused the fans of the sport to “blow” $49.99 on the pay per view.

It has been said. If you think you’re THAT good, then cut the showboating and finish your opponent. Damian Maia showed a lot of heart in that fight and he was doing everything he could to take it to Anderson Silva in the latter rounds – Anderson just wouldn’t engage and risk getting caught with something.

Hopefully history doesn’t repeat itself (again) when he faces Chael Sonnen. Chael Sonnen is a very high calibre wrestler (Olympic calibre as a matter of fact) so it’s no secret what his game plan will be. He’s a smart guy so he knows better than to go in there and stand and trade with Anderson on the feet so a takedown – or simply takedown attempts (depending how things go) – is pretty much a given.

In his last bout, Chael Sonnen absolutely mauled and manhandled a very credible opponent in Nate Marquardt. Being susceptible to the submission in the past, Chael Sonnen stayed patient, focused on control and didn’t make any mistakes (as a mistake is all it takes against a submission specialist as talented as Marquardt is).

If he can implement a similar game plan against Anderson Silva, he’ll pose a valid threat to the middleweight title. Of course, it’s always easier said than done for Anderson’s opponents as he’s yet to be defeated in the UFC. Dan Henderson has a similar fighting style to Chael Sonnen but even he fell victim to Anderson Silva in the past as he was submitted in the second round via a rear naked choke.

Granted, up until that point, Dan Henderson looked great. I wouldn’t say that he dominated the first round but he certainly controlled it. Control; that’s the key to victory for Chael Sonnen. If he can secure a takedown and not get overanxious, then I think he can grind out a decision victory. Of course, the odds are stacked against him and just as Chael Sonnen has the skill set to “control” Anderson, Anderson has the skill set to either knock Chael out or submit him. Either way, this one should be interesting..