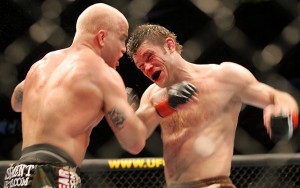 So it looks as though the Tito Ortiz vs. Mark Coleman fight that was originally booked for UFC 106 isn’t happening. Mark Coleman sustained a knee injury and had to pull out. When he did, Ortiz sent the following “tweet” to his twitter followers..

When Mark Coleman’s manager got word of Tito’s message, he issued a rather harsh, extremely personal statement of his own – which he later apologized for. Here’s what he had to say about Tito (and his girlfriend Jenna)..

I wasn’t originally excited about watching Tito Ortiz fight Mark Coleman but now that it’s gotten so personal, I wouldn’t mind seeing it in the near future. In the meantime, it looks as though we’ll get to see a rematch between champions since Forrest Griffin has been named as Coleman’s replacement.

As you most likely recall, Tito Ortiz and Forrest Griffin fought to a split decision back at UFC 59 with Tito Ortiz narrowly out-pointing Griffin for the victory. In that first battle, Tito Ortiz came out gunning and was absolutely dominating Griffin with his ground and pound techniques from within the guard that he’s known for. I remember watching that and I actually felt sorry for Griffin at the time, I thought that he was in way over his head.

However, in the second and third round, Forrest Griffin turned it on while Tito Ortiz had slowed down. He just didn’t look the same after that first round so I imagine that something was bothering him – either his back or his knee.

And speaking of injuries, this will be Tito’s first fight back in the octagon since he underwent surgery on his lower back – which is something that he claims has negatively effected his performance for years. Now, with Tito Ortiz functioning at his full potential, and with the overall improvements that Griffin has made, it should make for an interesting rematch.