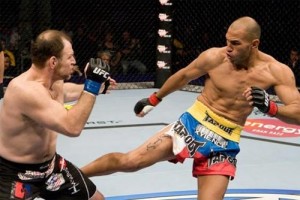 Both Brandon Vera and Randy Couture have had their share of fights in the heavyweight division but at UFC 105, Couture will drop down and meet Vera at 205. Couture – who shocked most of us when he signed a 6 fight contract extension at 46 years of age – will be looking to redeem himself after a hard fought loss to Antonio Rodrigo Nogueira at UFC 102.

This Randy Couture vs. Brandon Vera showdown makes for an interesting clash of styles. There’s a lot of things to consider with this. There’s no doubt that Brandon Vera is the better striker out of the two. Randy Couture can box, but Brandon Vera brings fourth a more versatile attack on his feet due to his Muay Thai expertise. He’s also a couple inches taller than Couture and with those long limbs, I’m pretty sure he’ll have a reach advantage.

Couture got clipped by Lesnar in the stand up, who lets face it – doesn’t really have much of a stand up game at all. There’s no doubt that Brandon Vera is light years ahead of Lesnar when it comes to striking and he’s much, much faster. Add in the fact that Couture is aging and it’s a physiological fact that with age comes slower reaction times. If Vera is to pull out a victory here, it looks as though it’ll come via strikes if anything.

Randy Couture’s main strength is his wrestling. He was a 3 time division 1 all-American and he was a 3 time alternate for the Olympic team (1988, 1992, 1998). He’s extremely strong in the clinch and he’s great at dirty boxing. Against a typical striker, his key to an easy victory would be to just push them against the cage to neutralize their striking or take them down and work his ground and pound.

The thing is, Brandon Vera is no slouch in those disciplines either. He’s an 8 time grapplers quest champion, he trains Brazilian Jiu Jitsu under Lloyd Irvin and he himself has a Greco Roman wrestling background. As a matter of fact, Brandon Vera used to train with Randy Couture at the Olympic training center before he made the transition into mixed martial arts.

I would still give the edge to Randy Couture when it comes to wrestling though. Even against the greatest wrestlers, Couture has never been overwhelmed in his career. He was able to manhandle Garbiel Gonzaga in the clinch and literally gave Tito Ortiz a spanking. I don’t see Couture – who’s only been submitted once in the last decade – tapping out to anything Vera might throw at him either.

So it comes down to this. Couture can box, but Brandon Vera a more well rounded striker. Brandon Vera can wrestle, but Couture is on a whole different level. If Couture doesn’t get knocked out, then I can really see this one going to the judges scorecards. I just hope for Couture’s sake that he’s learned how to check leg kicks after that Pedro Rizzo fight. Apparently he was in therapy for half a year following that fight to get his mobility back.

If these fighters decide to let loose in the middle of the ring, then this will be an awesome fight. But if they just tie each other up for 3 rounds against the cage (which I can sort of see happening), then we may be in for a snooze fest. Should be interesting to see how it all plays out.