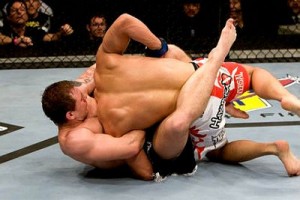 Set to take place at UFC 105 in England, this fight will be going down on the same card as the Randy Couture vs. Brandon Vera fight. The cards that they put together for the England events are usually pretty weak due to the time difference and they know they won’t sell as many pay per views, but this one is actually pretty solid.

As for the Denis Kang vs. Michael Bisping fight, it’s an interesting match up. Both fighters are pretty solid in every aspect of the game. Neither fighter is the best at any specific discipline but they’re both really well rounded. With this being his 45th fight, Denis Kang is the more experienced fighter of the two. Bisping has 20 fights, but half of those have been inside the Octagon.

Normally, that would indicate that he’s been up against some pretty tough competition but in Bisping’s case, that’s not exactly true. Up until recently, Michael Bisping has been extremely protected by the UFC. He’s had a pretty easy run considering that the majority of his fights have been in the light heavyweight division – which is by far the most competitive division that the UFC has.

It was extremely obvious that the UFC wanted him to be successful because they were trying to expand into the U.K market and they wanted Bisping to be the poster boy for the fans to cheer for. Even when he lost, they still gave him the victory. Just watch his fight against Matt Hamill to see what I mean.

Following the USA vs. UK Ultimate Fighter series, they gave Bisping some real competition in Dan Henderson and we all saw how that ended up. Henderson landed a crushing overhand right that knocked Bisping down and then if that wasn’t enough, he followed that up with a jumping hammer fist that knocked him out cold.

I’m not saying that Bisping isn’t a talented fighter because he is. I’m just stating the obvious by saying that he was protected, and now he’s going to get his chance to silence the critics like myself. He’s coming off a hard loss, and it should be interesting to see how he rebounds from it.

Denis Kang is no slouch and he’s a legitimate threat. Back in his PRIDE days, he was touted as the next big thing. However, over his last few fights, it seems like he hasn’t been in the right place mentally. He’s been making some really questionable mistakes that you wouldn’t expect from someone who’s a black belt in Brazilian Jiu Jitsu.

Against Gegard Mousasi, he literally fell right into a triangle choke and against Alan Belcher, he got submitted by an elementary guillotine choke. Those sort of things shouldn’t happen to a guy as seasoned as Denis Kang. That being said, he looked great in his last fight against Xavier Poupa-Pokam and I’m expecting the same sort of performance against Bisping.

I’m expecting Denis Kang to be the betting favourite in this one but I imagine it won’t be by very much. This is as close to a toss up as you can get. Bisping has the additional motivation of fighting in front of his home crowd and he’ll be looking to rebound from the most devastating loss of his career. Denis Kang will be looking to make a statement and return to his old winning ways. This should be a good one!