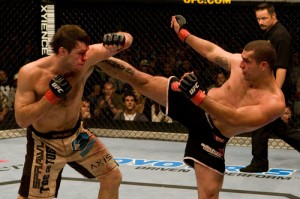 This Machida vs. Shogun showdown is an incredible match up and I personally feel that Shogun isn’t being given enough credit. Granted, up to this point, his performances in the UFC have been rather unimpressive but it’s important to remember that in his loss to Forest, he was coming off knee surgery so he clearly didn’t have the opportunity to go through his usual training camp.

And if you re-watch that fight, Shogun was clearly winning the first round. He dominated in that first round actually. He just ended up gassing and what’s when things took a turn for the worse and ultimately, he ended up getting choked out.

In the Coleman fight, which took place a little over a year later, he pulled out a victory but it was a lacklustre performance and once again, he looked as if he didn’t have much in his gas tank. Perhaps he was still having issues with his knee or perhaps he just took Coleman lightly – as a lot of opponents do. I mean, Bonner did and Coleman snuck in a victory against him.

Following the Coleman fight, Shogun fought Chuck Liddell and knocked him out in the first round with a shot that ultimately put an end to the “Iceman’s” fighting career. Shogun was looking more like his old self in that fight but since it ended so quickly, we didn’t get a chance to see his cardio get tested.

We can’t overlook the fact that Shogun is still young (27 years old) and while he went through a bit of a rough patch, we can’t forget how dominant he was in the PRIDE days. I mean, this is a guy who blasted through some of the biggest names in the sport. Rampage Jackson, Alistar Overeem, Kevin Randleman, Ricardo Arona and Kazuhiro Nakamura – they’ve all been lit up by Shogun in his prime.

And you know what, I think he’s still in his prime. He had a serious knee injury and surgery, he got married, he was distracted – it happens. If Shogun is in the right place mentally and he takes his training camp seriously, I think he may shock the world.

And as for why a Shogun victory would be considered to be a “shock” (seeing as how he was formerly the number 1 ranked light heavyweight in the world), well.. That’s just due to the dominance of Lyoto Machida. Machida is undefeated and he himself has “lit up” some of the biggest names in the sport as well. Tito Ortiz, Rashad Evans, Rich Franklin, BJ Penn and Thiago Silva have all fell victim to the unorthodox fighting style that Machida utilizes.

As for how these two fighters match up, well.. Machida seems to be a counter striker and as we witnessed in the recent Anderson Silva vs. Forrest Griffin fight, counter strikers perform best against aggressive styles – and that’s exactly what Shogun has. Being from Brazil, both fighters are comfortable if the fight hits the ground since they both have backgrounds in Brazilian Jiu Jitsu.

All things considered, I would say that Lyoto Machida has the edge over Shogun simply because we know that Machida is going to show up prepared and there’s too many question marks surrounding Shogun based on his previous Octagon performances. So, if you just asked me straight up who I think is going to win, I would say Machida. However, if I was betting (given the fact that Shogun is currently a 3-to-1 underdog), I would lay some money on Shogun because at those odds, I think it’s a good bet.