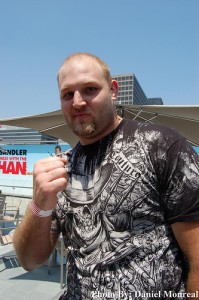 The Ben Rothwell vs. Cain Velasquez match up is interesting to say the least. Both fighters are relatively young (at 27 years of age) and both are hungry. Cain Velasquez is relatively new to the game with only 6 fights (4 of which have taken place inside the octagon) and Ben Rothwell, while somewhat unknown to a lot of fans, has almost 40 fights under his belt – which clearly makes him the more experienced fighter.

A quick analysis of their skill sets indicates that this is the classic striker vs. grappler match up – Ben Rothwell being the striker and Cain Velasquez being the grappler. And that’s not to say that Cain Velasquez can’t strike, I’m sure he can. I mean, he trains out of the American Kickboxing Academy (AKA) and just look what they’ve done over there with Josh Koscheck and his striking.

I’m just saying that his striking ability has yet to be seen. In his fight with Congo, Cain Velasquez was clearly outmatched on his feet and there were a few exchanges where he nearly got knocked out. He certainly showed that he can take a punch though. He took some big shots and as soon as he did, his instincts kicked in and he immediately shot in for the takedown. He ended up controlling that fight with his wrestling (as he always does) and ended up with his hand raised after 3 hard fought rounds.

I’ve watched most of his fights and they all look pretty much the same. Cain Velasquez just tosses guys around, controls them and just pounds them out. He was even able to do so against Jake O’Brian, who’s a pretty decent wrestler himself. But whether or not he’ll be able to do so against Ben Rothwell is the question.

Ben Rothwell stands 6’5 inches and weighs in at the heavyweight limit of 265 pounds. He doesn’t seem like he’d be an easy guy to toss around and if Cain Velasquez is unsuccessful with his take down attempts and both these guys stand and bang, Ben Rothwell will have a huge advantage. Kickboxing is a huge strength for Ben Rothwell. He’s even undefeated in his professional kickboxing career and as for mixed martial arts, 17 of his 30 wins have come by way of a KO.

Looking at the betting odds for this fight, Ben Rothwell is more than a 2-to-1 underdog and to me, that seems like a good bet. He’s the same age as Cain Velasquez, yet he has 30 more fights. He’s a solid striker and striking seems to a “weakness” for Cain Velasquez – if you can even call it that. At 6’5 he’ll likely have a reach advantage and at 265, I don’t see him being easily controlled.

Cain Velasquez was able to “weather the storm” against Congo, and land his takedowns, but Congo is notorious for having weak takedown defence. This is a tough one. I’ve been impressed with Cain Velasquez thus for but I just haven’t seen enough to warrant risking my money on him when I can bet on the bigger, more experienced fighter and triple my money due to the favourable odds (bet 100, walk away with over 300 after a Rothwell victory).

I clearly think Ben Rothwell is a better bet in this fight but I wouldn’t at all by surprised if Cain Velasquez pulled out a victory. He’s being toted by his team mates at AKA s being the “next big thing” so this is his chance to go out and prove it to the world.