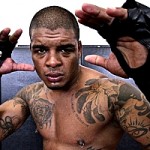 I’ve been waiting for this fight for a while now. Last night, at the first show put on by the “world series of fighting” organization, Tyrone Spong made his MMA debut against Travis Bartlett. This was as one sided as a fight could possibly be. Bartlett, dispute having 96 professional boxing fights to his credit, put fourth very little offense and ended up serving as a heavy bag for Spong.

Spong has aligned himself with the “Blackzilians” and being the high caliber athlete that he is and having the elite training partners that he does (Rashad Evans for example), he’ll likely rise to the top in the sport of Mixed Martial Arts the same way he has on the kickboxing scene. In his next fight I’m hoping for an opponent that will at least attempt a takedown so we can see how Spong responds to it.