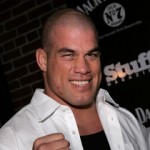 Here’s a recent interview with Tito Ortiz (post surgery) where he’s asked for his opinion on how he feels he matches up with some top competitors. Of course, being as cocky (and perhaps delusional) as he is, he says that he would “demolish” Shogun, that he “has the game plan” to defeat Anderson Silva (which actually may be true after seeing what Sonnen was able to do to him), that he would choke out King Mo and finally, to top it all off, he says that he would defeat Fedor via ground and pound (like that works out well for all the other wrestlers that try to do that).

Those are some pretty strong statements coming from a guy who’s winless in his last 4 fights but as inconceivable as those outcomes seem to us, you can’t really criticize the guy for believing in himself either. It’s the fighter mentality. The day that he starts questioning his abilities is the day that he should hang up his gloves for good. Before he gets a shot with any of the great fighters that he says he would “demolish”, he’ll have to rack up a string of wins starting with Matt Hamill, who’s his former student, at UFC 121.