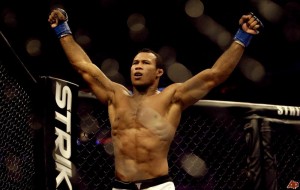 Renaldo “Jacare” Souza vs. Tim Kennedy is one of those fights that’s guaranteed to be awesome. Jacare would be a legit threat to anyone in the middleweight division, regardless of which promotion they fight for. Souza is not only considered to be one of the best grapplers in mixed martial arts, but also, he’s considered to be one of the greatest Brazilian Jiu Jitsu practitioners of all time! In other words, if he gets you to the ground, you’re fucked.

The blueprint to beating Jacare would surely be to keep the fight standing but over the years, his improved striking has made that a daunting task as well. In each of his fights, he’s looked sharper and more fluid in his exchanges. The best way to describe Jacare is that he’s somewhat of a crossbreed between Georges St. Pierre and Damien Maia. In other words, he has St. Pierre’s natural athleticism coupled with Jiu Jitsu skills that surpass that of Maia – who is the most accomplished grappler in the UFC.

Tim Kennedy however, isn’t a push over for anybody. He’s not the greatest grappler or striker in the game but like many other fighters, he has a well rounded game but perhaps his greatest asset is his mental toughness. Tim Kennedy has won several awards for his military oriented heroism, one of which includes the “bronze star metal”, which Kennedy was awarded for valor under fire. In other words, he’s the real deal and when you’ve put your life on the line time and time again, stepping into the cage for a fair fight with a referee on hand doesn’t seem like a daunting task at all. I’m willing to bet that Kennedy doesn’t even get nervous before his fights.

Speaking of his military background, Kennedy has also won the Military combative tournament 3 times. Of course, his opponents there weren’t on the same level as Jacare is. Before he made it to the “pro” stage in his MMA career, Kenny amassed a 30-1 amateur record and with numbers like that, it must raise a lot of uncertainty for his opponents as it could be all hype and can-crushing or it could be shades of greatness. I guess we’ll know for sure come August 21st in Houston, Texas. This will be good! Here’s a preview of the event..