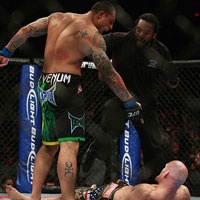 On January 2nd, after we’ve shaken off our hangovers from new years eve, we’ll get to watch a showdown between the two latest victims of Lyoto Machida. Rashad Evans will be looking to get back to his winning ways after he had his 14 fight unbeaten streak put to an abrupt end back in May.

Originally scheduled to face Quinton “Rampage” Jackson, Rashad now finds himself up against Thiago Silva, who’s fresh off a devastating knockout victory over Keith Jardine. Keith Jardine is Rashad’s good friend and training partner so one can only assume that Rashad will have some additional incentive to avenge his friends loss.

In terms of how these guys match up, both have knockout power in both hands and both aren’t afraid to stand and bang. Mind you, Rashad tends to move around the octagon quite a bit and he waits until he sees an opening before he explodes.

Thiago Silva on the other hand seems to be a little more aggressive, which is most likely the result of the years he spent training with the chute boxe academy in Brazil before moving to American Top Team. And on the slim chance that this fight hits the ground, both fighters are well versed grapplers.

Rashad Evans has a base in wrestling as he wrestled for Michigan State University and while the 48-34 record that he amassed during that time isn’t overly impressive, he’s blended that wrestling base in with his overall style. I mean, if Rashad wants to take you down, there’s a pretty good chance that he’s going too – just re-watch his fight with Stephan Bonner.

As for whether or not he’d want to take Thiago Silva down however, now that’s a different story. Thiago Silva holds a black belt in Brazilian Jiu Jitsu, which is surprising to most people seeing as how he likes to keep the fight standing and knock his opponents out using his Muay Thai skills – about 80% of his opponents to be exact.

As for how this fight will play out, this one is tough to predict. Both fighters have only been defeated once, and both of those defeats were at the hands of Lyoto Machida. And a fighters first loss, especially if that loss was a devastating knockout, it’s always interesting to see how he will rebound from it.

For some, it’s the best thing that could possibly happen and it gives them newfound motivation to train harder and for others, that first loss triggers a depression, a downward spiral and the fighter is never the same. We’ve had the chance to see Thiago rebound from his loss when he absolutely destroyed Keith Jardine at UFC 102 back in August.

As for how Rashad will deal with the loss, that remains to be seen. Thiago is yet another tough test for him but then again, with the way the UFC has been cutting fighters, and with the light heavyweight division being as stacked as it is, there really isn’t any easy fights to give him.

With both of these fighters being as well rounded and hungry as they are, this is a really tough fight to call. I imagine that come fight time, the betting lines will be nearly even and if they’re not, I suggest that you put some money on the underdog because this one can easily go either way. This one is as close to a coin flip as it gets.