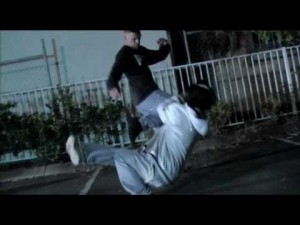 This video was released in the summer but I only just came across it now as a link to it appeared on my facebook newsfeed. If I missed it, a lot of you probably haven’t seen it yet either so I figured I’d post it up. It’s a short film (about 11 minutes long) starring John Wayne Parr. There’s nothing overly original about the storyline but the fight scenes are actually really good. The majority of the techniques are textbook Muay Thai moves. There’s also topless hooker at the start (so don’t watch it with either your parents or kids in the room). Oh, and in case you’re wondering, the guy John Wayne Parr is fighting with in the final scene is Thor Hoopman. Thor fights out of JWP’s “Boonchu” gym and currently holds a 18-4 pro Muay Thai record.