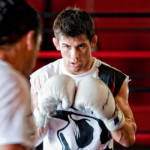 Dominick Cruz is the current bantamweight champion and this Saturday, at UFC 132, he’ll be defending his title against Urijah Faber. For people who have never seen him fight, be sure to watch it because he’s one of the most aggressive fighters in the sport and he pushes an extremely high pace. What’s nice about this particular matchup is the fact that Urijah Faber has the same fighting style so I’d be shocked if these guys don’t end up winning the “fight of the night” bonus.

In the first video, Dominick Cruz discusses how he got his start in the sport. From being a self managed fighter to deciding to quit school (he was studying to be a firefighter at the time) and pursue a career in MMA. Fighters always say that but it seems like a longshot that they’ll make it to the big stage but not only that, become one of the top paid fighters because the majority of the fighters under contract in the UFC are just scraping by and even having to work a second job to support themselves. I guess when you have a dream, you just have to follow it though. When you know, you just know and I guess for these guys, their desire outweighs what would be considered the “logical” thing to do. Anyway, in the second video, we get an inside look into Dominick’s training camp and his sparring sessions. Check it out..