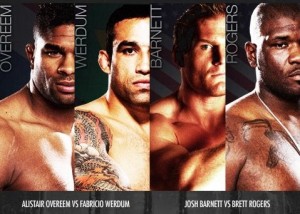 The Strikeforce heavyweight grand prix continues tomorrow night with Alistair Overeem vs Fabricio Werdum and Josh Barnett vs Brett Rogers booked as the tournament fights. The event is set to air live on the Showtime network at 10pm from Dallas, Texas.

All of the fighters have arrived and they put on an open workout, which is where Josh Barnett took the opportunity to dip into his “pro wrestling” pedigree to deliver an inspired speech warning to Brett Rogers as well as a demonstration that spectators seemed to love.

Below you’ll find a compilation of videos that’ll get you hyped up for tomorrow nights event. The first video is the official trailer and following that, there’s a “JZ” Cavalcante highlight video. Cavalcante is fighting Justin Wilcox, who has fought his way up to this big card via the “Strikeforce Challengers” events. Following the highlight video, you’ll find Cavalcante’s “fight diary” – which was just released today. From there, the remaining videos are from the open workouts (the weigh in videos will be posted as soon as they’re available).