It looks like Strikeforce is going to follow the K-1 platform and put on a heavyweight “world grand prix” of their own. I’ve always liked Strikeforce as a promotion and this is an awesome idea that’ll keep the fans happy. Strikeforce has a strong heavyweight division and this tournament format will pit them against each other to determine the best.

Personally, I feel as though Strikeforce has the top 2 heavyweights in the sport (Fedor and Overeem) and hopefully, they’ll end up meeting in the semi-finals. Here’s the structure for the tournament.. 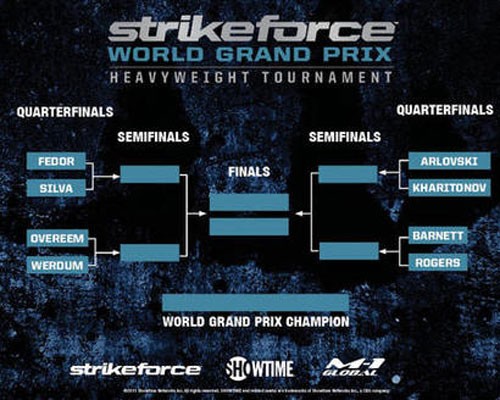 I’ve always felt that “Bigfoot” Silva would be a tough test for Fedor – or anyone in the division for that matter. He’s a big strong heavyweight with solid striking and an elite ground game. He’s as well rounded as they come so he’s certainly not to be overlooked. Fedor is Fedor though, and I’m sure he’s anxious to redeem himself from his loss against Werdum.

The best way for him to do that, obviously, is to earn a re-match with him in the Semi-finals but for that to happen, Werdum has to get through Overeem. He’s done so before, but that was nearly 5 years ago and a lot has changed since then. Overeem has gone through an un-human like transformation and the triple-promotion-champion has been smashing everyone since.

Clearly, Werdum needs to get the fight to the ground as soon as possible – and avoid getting hit with one of those “UberKnees” in the process – but of course, that’s easier said than done. It’s hard to see one of the fighters from the right side of the chart winning in the finals but out of the fighters, I’d say the Barnett could be the wild card here.

He’s been out of action for a while and he certainly has the size, strength and grappling ability to potentially give either Fedor or Overeem some problems. For Werdum, Barnett is competent enough on the ground to avoid being submitted (although Werdum is on a whole other level in terms of his level of BJJ) and he’s a good enough wrestler to be able to keep the fight standing.

There are plenty of interesting match ups in this tournament. Things are set to kick off on February 12th with Fedor will facing “Bigfoot” and Arlovski taking on Sergei Kharitonov. Overeem vs. Werdum – which will be a 5 round title fight – will most likely take place sometime in May. It’s been announced that each title fight will be 5 rounds. Obviously, the title could potentially be passed around a bit and winner of this tournament will emerge as the Strikeforce heavyweight champion.

It’s a shame the UFC doesn’t cross promote. Just imagine how entertaining this tournament structure would be if it was the top 4 Strikeforce heavyweights vs. the top 4 UFC heavyweights. For Strikeforce, you’d have Fedor, Overeem, Barnett and either “Bigfoot” or Werdum against say.. Velasquez, Dos Santos, Lesnar and Carwin. With Fedor and Overeem, I’d say that Strikeforce would have the edge in that tourney although Cain Velasquez would be the “wild card” and could potentially win it all..