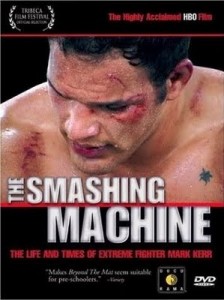 I was bored tonight and decided to search Youtube for an old MMA documentary that I wanted to re-watch. It’s called “Smashing Machine” and it’s basically the life story of Mark Kerr; who’s a multiple winner of the UFC heavyweight tournaments and along with Mark Coleman, one of the guys to pave the way for wrestlers in the sport.

Anyway, this documentary is incredible. To this day, it’s considered to be the best MMA documentary ever made so I figured I’d post it up here for those who haven’t seen it yet. From the description; “the smashing machine is critically acclaimed for its sobering account of the brutal sport of early no holds barred fighting and the depths of addiction in which Mark Kerr succumbs too and eventually overcomes”.

The documentary does a great job at alternating between Kerr’s professional career and his personal life. From backstage access to his fights in PRIDE to his addiction to painkillers, this documentary truely gives the viewers and inside look into the life of a fighter (well, Mark Kerr anyway). It’s cool to watch now knowing how far the sport has come in the past decade and knowing that Kerr is one of the guys who started it all. Check it out..