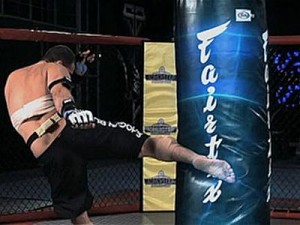 For those you who are doubting Shogun’s chances against Jon Jones this weekend, this video should help restore your hope in the Brazilian Muay Thai expert. Shogun recently stopped by the sports science lab to measure the force of his Thai style kick on the heavy bag. We already know that the Muay Thai style kick is the most powerful and of course, we already knew that Shogun Rua was great at throwing them. However, the results are still impressive. Not only was Shogun able to deliver the hardest kick they’ve ever recorded but at 2749 pounds of force, Shogun was able to deliver the hardest STRIKE that they’ve ever measured in the sports science lab.

I’m not sure when this video was filmed, but it looks as though his knee isn’t bothering him much anymore and he seems to be in decent shape. Hopefully he’ll be prepared this Saturday because getting through Jon Jones isn’t an easy task for anyone.