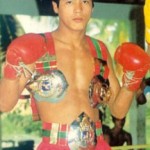 I’m a little surprised that it took me as long as it has to come across this video but I’m glad I did. It’s called “pass it on” and it briefly showcases the beginning of a fighters career (where his mother takes him into the camp to initially meet his teacher who is played by Samart Payakaroon) until the point where he becomes a lumpinee stadium champion.

At the end of the video, the roles are reversed and the student becomes the teacher as it shows a new child being brought into the camp to learn. The second teacher is played by Sangtiennoi. Both Samart Payakaroon and Sangtiennoi are former champions and Muay Thai legends. Anyway, it’s a great video that captures the art quite well. Check it out..