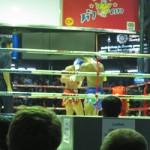 On Friday night, a few of my friends and the trainers at the gym that I’m currently training at here in Bangkok went out to Lumpinee stdium to watch the fights. The fight card was pretty stacked so I had one of the guys record the fights for me so I could post on here to share. Well, after trying to upload the FIRST ROUND (part 1/5) of the Saenchai vs Saketdao fight for approximately 83 MINUTES before I got disconnected, I decided to just do a search and see if anyone else had already posted up the fight and sure enough, a few people already had. The internet in Thailand really sucks sometimes!

Anyway, the following video was filmed by someone in the crowd so it’s not as high quality as the Nopparat Keatkhamtorn vs Kem Sitsongpeenong fight video from the Isuzu tournament but it’ll have to do for now..