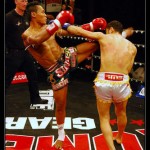 This video isn’t new by any means as the fight took place back in April, but I just watched it for the first time today as it was posted on my facebook wall. Saenchai Sor Kingstar, for those who don’t know, is widely considered to be the greatest active Thai fighter in the sport. I often ask my trainers in Thailand who they think the best fighter is and 9 times out of 10, they’ll give me the same “Saenchai number one” response with a big smile on their face.

In this particular fight, Saenchai dispays a variety of his skills as he easily dispatches Yetkin Ozkul, who was representing the RMB gym. For more Saenchai Sor Kingstar fight videos, you can head on over to Thai Boxing Tube and see for yourself why he’s considered to be the “Michael Jordan” of Muay Thai.