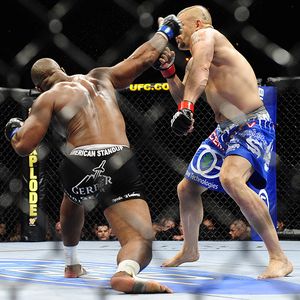 Set to headline the UFC 88 card in Atlanta on September 6th, the Chuck Liddell vs. Rashad Evans showdown is an interesting match-up to say the least. Both fighters have a lot on the line. Liddell, who’s coming off an impressive victory over Wanderlei Silva, is in a sense, fighting for his legacy. He’s turning 39 in December and one would think he’s nearing retirement (although you never know). After going 1-2 in his last 3 fights, he needs a win over Evans to get himself back into title contention.

However, as his near perfect 11-0-1 record indicates, getting a “win over Evans” is no easy task. Granted, Evans has never faced an opponent as tough as Liddell. If there’s anything we’ve seen that may potentially indicate the outcome of this fight, it’s the two Liddell vs. Ortiz fights. Liddell had no problems finishing off Ortiz in both fights and Rashad and Tito have nearly identical skill-sets (as seen when they went to a draw at UFC 73).

Here’s Where It Gets Interesting

Although Rashad and Tito “had” nearly identical skill-sets, Rashad Evans has been working with Kru Phil Nurse. Phil Nurse is a Muay Thai champion and he’s the man behind the much improved striking of Georges St. Pierre. Rashad has yet to fight in 2008 and being the gifted athlete that he is, he’s always improving. While on the Ultimate Fighter reality show, he was primarily a wrestler who could box a little bit. Since then, he’s been constantly improving and has now evolved into a mixed martial artist.

It’s also worth mentioning that Chuck Liddell’s latest defeat was at the hands of Keith Jardine – who is one of Rashad’s training partners. Both fight out of “Jackson’s Submission Fighting” and if they beat Liddell once, who’s to say that they can’t devise a game-plan to do it again. When you consider the fact that Liddell had a hard time defending Jardine’s Thai-style leg kicks and you take into account all the Thai boxing that Rashad’s been doing with Phil Nurse, it makes for an interesting match-up. And of course, you can’t forget the fact that Liddell was sidelined due to a severely torn hamstring, Rashad was in the gym training with some of the best fighters in the world.

So Who’s Going To Win?

I’d say the best thing for you to do is to consider the facts and of course, consider how the betting odds weigh against those facts. Make the appropriate bet based on that. And of course, as always, trust your gut instinct.