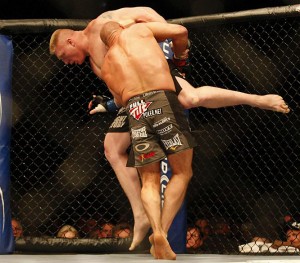 We’re only a few short weeks away from seeing the first pure boxing vs. mixed martial arts showdown in the history of the UFC. Two champions in their respected disciplines and two seasoned veterans of their sport. While James Toney is the first pure boxer to step into the Octagon under the UFC banner, he’s actually not the first boxer to step up and put his skills to the test against MMA fighters under MMA rules.

Ray Mercer has done it, twice actually, with mixed results. In his first fight, he faced off against fellow striker, Kimbo Slice. Kimbo wisely stuck to his game plan as he closed the distance and ended up submitting Mercer with a guillotine choke. Kimbo Slice winning by submission? Go figure.

However, in Mercer’s second fight, he took on former UFC heavyweight champion, Tim Sylvia, in what many fans labelled as a “freak show” fight. Well, Mercer proved to the world that anyone has a “punchers chance” and when you’re a world class boxer, a “punchers chance” takes on new meaning. He knocked Sylvia unconscious in under 10 seconds.

In this upcoming fight between James Toney and Randy Couture, the general conscious is that Couture will run Toney up against the cage to neutralize his boxing skills, work for a takedown, and then just pound him from top position. The chances of that happening are actually quite high – especially when you consider the fact that Couture is known for his solid game planning. There is no way that a guy as experienced as Couture is will play with fire and stand in the pocket against a guy like Toney.

It  also became quite evident that Toney is completely dismissing the other aspects of mixed martial arts when he used the term “side check kick” when he was describing his other “abilities” to Dana White. I believe he’s been working on his wrestling with “King Mo”, which is a good choice as he was a top ranked wrestler, but really, there’s no way he’s going to learn enough to hold is own with Randy in such a short amount of time.

I would say that Randy wins this fight 9 times out of 10. However, there’s always a chance that Toney will shock the world, and that’s what makes this fight so interesting. There’s no sense in breaking down the strengths and weaknesses of each of these guys as it’s fairly obvious. Just a few more weeks until we get to see it go down. Until then, here’s a video teaser..