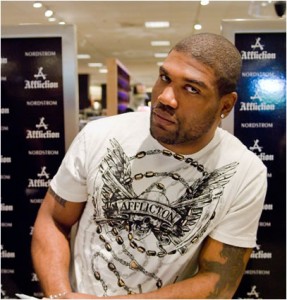 In pretty much all of his interviews, and basically any time the camera is pointed in his direction, “Rampage” does a great job at entertaining the audience but in this particular video, it’s hard to tell whether or not he’s putting on a show or actually being serious. I’m hoping it’s all an act because if this is legit, then it’s pretty pathetic that Rampage would square up with Ariel Helwani.

At the 2:50 mark of the video, Rampage took offence to the fact that Ariel said he wanted to “squash” the “beef”. In other words, Ariel wanted to make amends, set aside their differences and move onto the next topic. Well, in Memphis, apparently “squashing a beef” has the exact opposite meaning that it does everywhere else in the world and when the words were said, Rampage sort of lost his cool.

Rampage then goes on and talks about how mentally strong he is in reponse to a comment from Hamill saying that he would “break his will”. I get where he’s coming from, but there’s something ironic about a guy who lost his cool and got in a high speed car chase following a hit and run (allegedly leading to the death of an unborn baby) after losing a fight claiming how “mentally strong” he is.

This isn’t the first time Rampage has acted like a bully in his interviews either. In the past, he took it upon himself to slap Ariel mid interview and I recall another video from his PRIDE days where he was strolling through a department store in Japan and took it upon himself to insult some innocent Japanese employees teeth. I’m not too sure if she understood but regardless, there’s a fine line between being funny and just being an asshole and Rampage definitely crosses it here (especially in a country like Japan where the humor doesn’t translate due to the cultural differences). Here’s THAT video if you wanted to check it out. Most recent video is below..