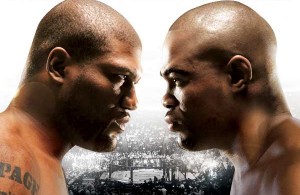 Brace yourself for some “black on black crime” (as Rampage puts it) because the headliner at UFC 114 is the long awaited clash between Quinton “Rampage” Jackson and “Sugar” Rashad Evans. This fight has been a long time coming as they were the rival coaches on TUF 10 and throughout the series, we could all see that the heated rivalry went beyond the show and that they genuinely don’t like each other.

Well, after a long hiatus following a dispute with the UFC over taking some time off to film a movie, Rampage has since re-signed with the organization and the fans will surely benefit as the fight with Rashad Evans is just around the corner. As for how these two fighters match up, well, it seems as though their skills sets are fairly even.

Both “Rampage” Jackson and Rashad Evans have demonstrated that they have serious power in their hands (just look at their fights against a common opponent, Chuck Liddell). With both guys possessing that one-shot KO power, I doubt this will last long if these guys decide to stand and bang.

If Rashad decides to play it smart, then his best bet is to avoid the heavy hands of Rampage and use his superior wresting ability to take the fight to the ground. Rashad has an impressive collegiate wresting background and to this point, he’s used it effectively throughout his mixed martial arts career.

However, taking Rampage to the ground is easier said than done. One of “Rampages” best attributes is his inhuman-like strength and he uses it well to stuff takedowns and power out of submission attempts. That being said, as daunting of a task it is to fight Rampage, Rashad’s key to victory will be good game planning – and he just so happens to have MMA’s most strategic coach in the sport in his corner (Greg Jackson).

I can picture Rashad coming out, using movement and footwork to avoid the heavy shots that Rampage will be throwing at him. When Rashad attacks, he should move in and out quickly and since Rampage has demonstrated an inability to check leg kicks in the past, Rashad should be throwing plenty of them. A weakened lead leg due to kicks to the thigh equates to a less powerful right hand as Rampage won’t be able to step into his punches.

In addition to the movement and low kicks, Rampage should mix things up and shoot in for the takedown once Rampage isn’t expecting it. Bottom line is that Rashad needs to fight smart and mix up his attacks in order to pull off a victory in this. If he just squares up and goes toe to toe in a slugfest with Rampage, I don’t like his chances. Rampage has a better shin and he seems as though he’s a little more powerful.

This fight can go a lot of ways and a lot of different things can happen. It’s really a toss up. However, the one thing that I don’t see happening is these two guys coming out and NOT putting on a great show. It’ll be entertaining, that’s for sure.. Here’s a fan-made preview to get you hyped..