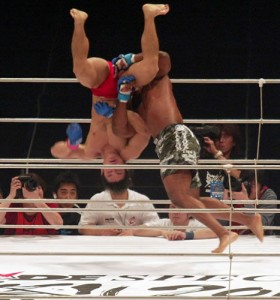 With Quinton Jackson headlining tonight at UFC 130, I figured it was the perfect time to post his second MMA fight from over 11 years ago against a guy named Marco Bermudaz. It was an “Underground Pancrase” event in Huntington Beach, California and it’s where Jackson went initially made the transition from “Quinton” to “Rampage” (as he would put it).

While I’m certainly not a fan of his recent antics, there’s no doubting the fact that Rampage possesses some serious power. The world took notice of it when he power-bombed Arona as a triangle defense at a PRIDE event back in 2004.

In the video below, “Rampage” manhandles and slams Marco – who looks to be about 240lbs – 4 times with ease in route to a submission victory. It’s almost like, when you see someone who doesn’t look that strong bench pressing a lot of weight in a Youtube video and you start to question whether or not the weights are plastic. In this situation however, while it seems nearly impossible that someone would be able to toss around a heavyweight like he did, there’s no questioning whether it’s legit or not. Apparently “Rampage” is just THAT strong. Check out the video..