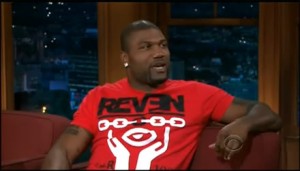 To promote his upcoming fight with Matt Hamill this Saturday, “Rampage” made an appearance last night on the LATE LATE show with Craig Fergusion. Rampage has made it clear that he wants to quit fighting in the near future to pursue an acting career and based on this interview, and pretty much anytime the camera is on him, he’s a pretty charasmatic guy and has what it takes to entertain people.

His fight with Hamill is just mentioned a bit at the start (perhaps because it’s not that interesting to begin with) and from then on, him and Craig discuss a bunch of stuff from bouncing at nightclubs to having sex before fights. Anyway, check it out below..