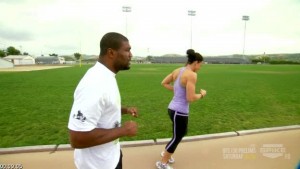 We’re only a day away from UFC 130 and the second installment of the “In The Moment” series has been released. The first edition featured Jon Jones in his preperation for his fight with Shogun and this time, it’s Rampage Jackson who will be giving us an inside look into his training camp. Jackson – who will be fighting Matt Hamill this Saturday night – has been under some criticism lately following a controversial interview where he squared up with Ariel Helwani and threatened to “slap the shit out of him”.

In this video however, we get to see the lighter, more “chilled out” side of him. This “In The Moment” series that the UFC is getting their more charismatic fighters to put together is just awesome. I really enjoy getting an inside look into the training routines and nutrition strategies that the fighters are using throughout their fight camps. The series, which brings a more “personal” feel to it than regular hype videos, also gives us an idea regarding the current mental state of the fighter.

It looks as though Rampage has taken this fight with Hamill pretty seriously. With an opportunity like this though, it’s a pretty safe bet that Matt Hamill has stepped up his training routine as well. Hamill definitely got a huge opportunity when he was awarded this fight (which was bumped to being the main event once it was announced that the Edgar vs Maynard fight was off). Anyway, here’s the video..