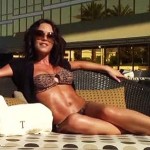 MMAthletics is hosted by Jay Glazer and Rachelle Leah and airs on the FoxSports website every Monday. In this weeks episode, there’s a recap of UFC 130 as well as some footage of Jon Jones signing autographs for his fans at the “gun store” in Las Vegas. The main concept of the show is to “give you a behind the scenes look into the world of MMA” and as usual, that entails paying a visit to one of the popular MMA gyms. Being based in Las Vegas, they stop into the Xtreme Couture gym to showcase the gym and interview some fighters.

Interesting to note is the fact that the fighters at Xtreme Couture (Jay Hieron, Vitor Belfort, Mike Pyle) seem open to the idea of fighting each other and keeping it “business”. The mindset at Couture’s gym definitely seems different from the mindset of the fighters over at Jackson’s and AKA where they absolutely refuse to fight each other. Anyway, check out the video..