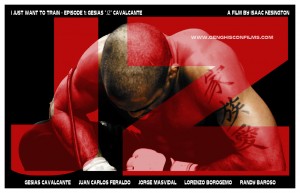 Genghis Con has recently made another video that gives us a behind the scenes look into a top fighters training camp. This time, the video is entitled “I just want to train” and it showcases Gesias “JZ” Cavalcate’s MMA workout routine. It seems as though he does his strength and conditioning workouts at the South Miami sports performance facility – where judging by the footage, they get pretty creative with the exercise selection. There’s a lot of punching against the added tension of resistance bands, which isn’t revolutionary by any means but it’s certainly sport-specific and effective.

The “exercise” the stood out the most was at the 6:25 mark where they were whipping balls at “JZ” as he used his head movement to dodge them and close the distance. The video closes out at the American Top Team facility with some surprisingly hard sparring (in 4oz MMA gloves and no shin guards) between “JZ” and Jorge Masvidal. This is only “part 1” so there’s going to be more on the way.